‘Kill Dil’ will now have to rely on good word of mouth to post good weekend box office collections. 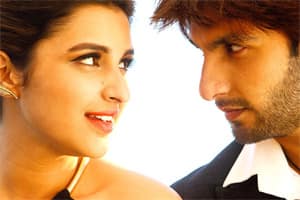 When a film is a solo release, expectations are always high and the same was the case with the Parineeti Chopra-Ranveer Singh starrer ‘Kill Dil’, but its box office collections, which were expected to make a good start, managed only an average opening across the country.

According to early estimates, as reported by Koimoi, the action-romance film from the Yash Raj Films, managed to collect Rs 7.25 crore on the opening day. Read Kill Dil Movie Review

While the morning shows of the film, which also features Ali Zafar and Govinda, opened to packed houses with an 80 per cent occupancy rate, the subsequent shows reflected a drastic drop in bookings. If that was not enough, the film will also face competition, albeit mainly in metros from the Hollywood releases ‘Boyhood’, that has been receiving tremendous praise across the globe and the action flick ‘John Wick’.

‘Kill Dil’ has officially been made on a budget of Rs 40 crore, inclusive of print and publicity, will now have to rely on good word of mouth to post good weekend collections.