When you are faced with mortal danger, you can either fight or flee. 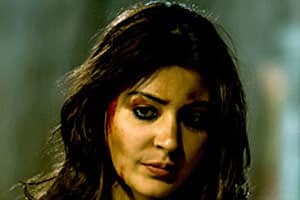 When you are faced with mortal danger, you can either fight or flee. NH 10 takes us on a journey in which both fleeing and fighting struggle for space, till the time comes to stop running.

When young, attractive, urban professional Meera (Sharma) urges her husband (Bhoopalam) to run away from the men who are terrorising them, she is doing what instinctively comes to most of us. When she turns around to face the enemy, we want to cheer. Because this is a lone woman in a man’s world, the kind of world where women are killed before they are born, or dumped, after they draw their first breath, in rubbish bins. It is the land of the Khaps, where caste and gender determine whether you will live or die. Or, worse, how you will live and die.

The build-up in Navdeep Singh’s second feature is so tight, so tense, so horrifying that you can’t blink. NH 10 goes through Haryana, which is about as far as it can get from the upscale Gurgaon highrises people like Meera and Arjun occupy: as a character tells Meera, “jahaan aapke Gurgaon ka border khatam hota hai, wahan law khatam, maddam”.

Saw NH10. Absolutely engaging cinema. Edge of the seat till the end. Anushka is a delight to watch.

A run-in with a bunch of violent men who are seen abducting a young couple begins a spiral in which Meera and Arjun sink deeper and deeper, with no reprieve in sight. Gunplay results in an accidental death, and the bunch, led by Satbir (Kumaar), turns upon the two with murderous intent.

When the chase is under way, the two urbanistas running for their life, wounded and bleeding, you sit there with your heart racing and your hands clenched. Till this point the film is wholly believable, especially for those of us who have traversed the badlands of Haryana: these are roads where women are not safe, whether it is broad daylight or in the dark watches of the night.

Which is why Meera’s decision to turn upon the men with no other weapon than burning rage is too much of a stretch. Singh is clearly someone who knows his Jatland. His villages which dot the Haryana countryside are full of just-right sketches of grizzled taus sitting on khaats and being sardonic: that their jokes are misogynistic will never have occurred to them. The men are drawn with insider knowledge, and they are all scarily good, especially the always excellent Jhankaal, and Kumaar.

Some of Singh’s skills which he used to make Manorama Six Feet Under such a terrific film are in evidence here, in the recreation of the place where his lethal drama is playing out. The female sarpanch (Naval) who is the kind of woman who is the worst enemy of other women, rings true. So do the other women: both the one who survives and the other who doesn’t, paint an accurate portrait of a part of today’s India which lives, flagrantly flouting all rules, in medieval times.

But the suspension of disbelief is difficult when it comes to the leading lady, who, in her zeal to become a Killi Billi, throws the credibility switch. It’s not that Sharma, who has also produced the film, is not trying hard. She is, and up to a point, she is in fine fettle. But at the point when she turns from flee to fight, I stopped believing.

Leading ladies green-lighting films that can have them on top is wonderful, but to what end? Meera, dragging on her stolen-but-earned cigarette, deciding on a career path, being an equal partner, is a great sight; Meera, dragging a sharp bhala on the ground, with the soundtrack helpfully amplifying the sound, does not leave me cheering.