Musical razzmatazz: Know what has led to sudden explosion of music festivals in India

Music festivals in India have gained new momentum in the past few years. But what has led to the sudden explosion of such festivals? We find out. 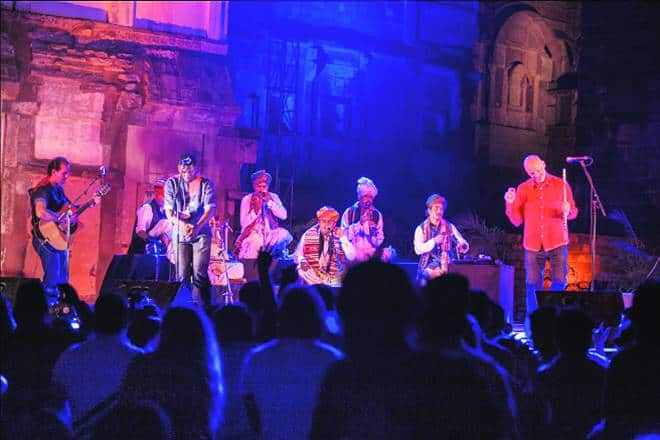 Jodhpur RIFF presents about 200-250 Rajasthani traditional musicians and another 150-200 individual musicians from India and abroad every year; and (below) Mahindra Open Sky, which makes its debut in November in Rajasthan, will present a finely curated line-up of artistes such as actor and musician Ayushmann Khurrana.

If you thought music festivals in India have hit their saturation point, you couldn’t be more wrong. With over 25 big-ticket festivals happening every year, you would wonder why another one? But the people behind Mahindra Open Sky would want you to rethink that, as the festival promises to be ‘different’. Mahindra Open Sky, which makes its debut in November at Reggie’s Camel Camp Osian, a luxury camp resort near Jodhpur, will present a finely curated line-up of Indian and international artistes, along with adventure activities and wellness workshops. “With its immersive experience of culture and adventure, Mahindra Open Sky celebrates the romance of the desert and embodies the spirit of ‘live young, live free’. Set against the backdrop of the mighty Thar, it presents a unique opportunity to be part of a collective of souls with common interests and passions,” says Anand Mahindra, executive chairman, Mahindra & Mahindra, which is organising the festival. Music festivals in India have become big property. Almost every month, there is a music festival happening in the hills, city or in the desert. It may still be some time before any of them hits the scales of a Woodstock or a Glastonbury, but they are growing bigger and better with every passing year. From folk music to classical, pop to rock, jazz to EDM (electronic dance music), fans are spoilt for choice.

“The live music scene in India is a niche, but growing phenomenon. It has been about 10-12 years since the beginning of the current phase and audiences have been able to sample a variety of events and festivals in this period. They are now willing to buy tickets, more than ever, for events that offer quality experiences,” says Divya Bhatia, festival director, Rajasthan International Folk Festival (RIFF), Jodhpur. One of the pioneers in the festival circuit is Sunburn Music Festival, which has grown from 2,000 people gathering at a beach in Goa in its inaugural year to over 25,000 attending it in less than a decade. Both Sunburn and VH1 Supersonic shifted base from Goa to Pune last year, but the change in venue hasn’t marred their popularity. And Goa will get a new multi-genre music festival in Time Out 72 Hours this December.

So what has led to the sudden explosion of music festivals in India? Industry insiders say ‘growing interest’ and ‘big money’. “Almost all successful festivals work on multiple revenue streams, including partnerships, tickets, merchandise, food, etc, and it’s important for organisers to rely on and invest in a healthy mix of these revenue sources. Another aspect is building and retaining a strong community of followers who come back year after year, and also help spread the word. So from an organiser’s perspective, the investment is both creative and strategic,” says Sanjoy Roy, managing director, Teamworks Arts, which organises festivals such as Jazz India Circuit (JIC), Goa International Jazz Live Festival, The Sacred and Mahindra Kabira Festival. ‘Music tourism’ and ‘consumer engagement through music’ are trends that are catching up fast.

Every October, Mehrangarh Fort gets a fresh lease of tourists thanks to Jodhpur RIFF, which has grown in size from 70% of audience in the first year being given complimentary entry, to 80% of audience buying tickets last year. “On an average, every year, we present about 200-250 Rajasthani traditional musicians and another 150-200 individual musicians from India and abroad,” says Bhatia. The Ziro Festival of Music that debuted in 2012 popularised the destination, Ziro (in Arunachal Pradesh), for people outside north-east India. And it’s a win-win situation for the musicians who now have a choc-a-bloc calendar. Lesser-known artistes get a bigger platform at festivals such as Jodhpur RIFF, where folk artistes often collaborate with international ones. Festivals such as NH7 Weekender and Sunburn have become multi-city events. “We are looking at adding two more performances in Delhi in the coming season of the JIC.

We want to make our festival significant, commercially viable and sustainable for all those involved with the genre, from the artistes to communities and aficionados,” says Roy. The JIC, which started last year, saw a 15-20% increase in audience turnout this year at the Delhi event. “Similarly, Goa International Jazz Live Festival, which we acquired last year, has shown much promise. We are hoping we are able to attract the right talent, as well as a bigger audience with the JIC,” Roy adds. Fuelling the trend are corporate sponsorships, government funding, musicians-turned-organisers and event management companies. Mahindra Group has three festivals in its kitty, each different from the other. “Mahindra Kabira is an exploration of the teachings and thoughts of saint Kabir. With Mahindra Blues Festival in Mumbai, our goal is to make it the biggest such event outside of the USA.

And Mahindra Open Sky, our newest festival, is a never-seen-before combination of culture and adventure,” explains Jay Shah, VP and head, cultural outreach, Mahindra Group. As the music festival market gets bigger, what’s on offer is not just an eclectic line-up of artistes and soulful music. You also get several allied activities such as workshop with artistes (Jodhpur RIFF), heritage walks (The Sacred Festival), adventure activities (Mahindra Open Sky) and food festivals (Hornbill), to name a few. Ticket prices for a three-day festival vary between Rs 450 for a single event and Rs 30,000 for a three-day festival ticket, depending on the festival and the number of events. Clearly, it’s no longer just music on offer, but an experience.