Over a couple of hours, each spread over three films and 18 years, Richard Linklater… 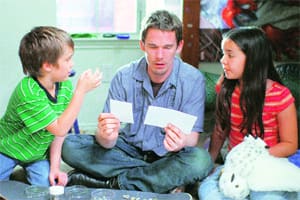 Over a couple of hours, each spread over three films and 18 years, Richard Linklater, Ethan Hawke and Julie Delpy gave us both one of cinema’s greatest loves and among its most ordinary marriages. Could you then expect anything less of Boyhood, an experiment never tried before and unlikely to be done again, soon? Over the course of nearly three hours, Linklater, also the writer, tells the story of a boy growing up from age six to 18, working with the same set of four actors, assembling them for a couple of days’ shoot every year for 12 years.

In all, he shot for 39 days; less than thousandth the number of days that pass in the main character Mason’s life. You wouldn’t know.
We have already seen Linklater’s love for letting his characters drive the story rather than the other way around. However, in Boyhood — beginning with the first shot of Mason (Coltrane) lying on the grass, his arm stretched at an odd angle behind him, looking up at the sky — the biggest presence is the absence of a “driving force”, quite like in real life. It’s because life happens when you are busy doing other things, that “Mom” (Arquette) and “Dad” (Hawke) first have their unplanned kids, and what is then their very logical divorce. It’s because “Mom” is mom that her life goes a certain way, while “Dad” is out doing what he feels he needs to do. It’s because Mom feels that gap every time, that she makes own hasty choices in the men that follow. It’s because Dad can work at being dad — and he gets around to that — but Mom never has that luxury.
So yes, Boyhood could very well have been called “Girlhood”. But it may be no coincidence that Linklater went with the first name. Ask any mother about coaxing any information out of her 8-year-old son to 18 and, as a character says here, “all I get are mumbles”. From her phone chatter, to her hair, piercings and dress, you would know a lot about your girl by then.

It’s also natural that Samantha (Lorelei), older than her brother by a couple of years, is running circles around him when they are kids. She is getting A’s in her history assignments, scoring a dozen or more baskets in her matches, and keeping her brother awake at night with crazy dance steps that demand an audience. His homework sheets are found mostly crumpled at the bottom of his school bag, he doesn’t like soccer too much, collects snake vertebrae (nothing too grand, just small, dainty ones), and he can’t even match her in bowling or pillow fight.

Lorelei, Linklater’s own daughter, is astonishingly good in the first six-odd years of this film’s life, before teenhood strikes and Mason comes forth while she recedes into moody silences. Hawke is quite in his Linklater mould, while Coltrane has just the reticence and the sudden sparks required of his character.

Linklater marks the passage of time through changing hairstyles, facial hair and body muscle as well as growing wrinkles, sagging arms and widening waistlines, but also satisfyingly in the alteration of the worlds his characters inhabit. So in the beginning Dad is telling his children about “never voting Bush” (the year is around 2004, George W Bush vs John Kerry) while forgetting to mind his cuss words and smoking openly. He talks in evasive generalities, drives a cool car, and is a self-confessed Democrat in Texas — and what could be wrong with such a guy? But that’s Dad’s first visit to his children in one-and-a-half years and Mom isn’t about to let him forget that, even if it is with just a few casual questions underlining that the children haven’t had anything to eat but French fries and everything to do but homework.

Video games get fancier, a war veteran drops in, the almost-blind romance for Obama enters the picture, there is an encounter with a Mexican immigrant, followed by a return to religion, and suddenly as Mason inches more towards puberty and his parents towards post-idealism, politics doesn’t occupy their world view.

Instead, Mason talks and talks much like Jesse in Before Sunrise and its sequels, about life in the digital world. He doesn’t have as receptive a listener as Jesse’s Celine, and the film disappointingly, repeatedly plays down the likelihood of such a girl existing. However, while making this film over 12 years, Linklater came out with both Before Sunset, where Jesse and Celine meet again after a gap of nine years, and Before Midnight, where they are arguing over his and her priorities in a row that starts with him talking about his distance from a son from his previous marriage.
See all the films together, and it’s interesting where Boyhood’s Dad and Mason fit in, or that Dad and Mom have no names.

Interestingly too, Celine has no place in this world. She is an idea whose ageing is too much for even this film on growing up to bear. As it draws towards its slightly drag of an end, the one image that stays in your mind is Mom (Arquette, miles, miles ahead of the others) at her small table, with bills again spread out before her, her tired eyes welling up with tears.

“My life has been all about milestones,” she says. “I thought it would be so much more.”