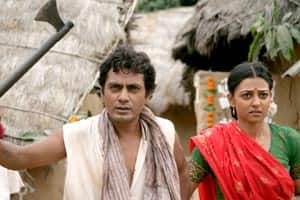 Nawazuddin Siddiqui starrer biopic ‘Manjhi – The Mountain Man’ box office collections have not been, well, mountainous. Far from it, in fact. Even though many were expecting an overwhelming response, ‘Manjhi’, released on August 21, earned just Rs 1.40 crore on Friday. Collections rose to Rs 2.35 crore on Saturday and Rs 2.70 crore on Sunday, taking the overall domestic figure to Rs 6.45 crore.

One reason behind this fiasco could be the leak of the final preview of the movie some 10 days before the official release. The film was downloaded and shared multiple times before it came to the notice of the producers.

Actor Nawazuddin Siddiqui tried to rescue the situation and described the leaked version of the movie as a rough cut and asked people to watch the ‘real’ movie on the big screen.

However, the movie did receive appreciation from critics, especially Nawazuddin Siddiqui’s acting.

‘Manjhi’ is based on the life of Dashrath Manjhi, a labourer from Gaya district who carved a path through a mountain using only hammer and chisel in the memory of his wife (played by Radhika Apte).

‘Manjhi – The Mountain Man’ is a low budget movie directed by Ketan Mehta.