Like all his films, ‘Lingaa’ is basically three hours of Rajinikanth doing his thing and it is 3 hours of full-on ‘masti’ and ‘mazaa’. 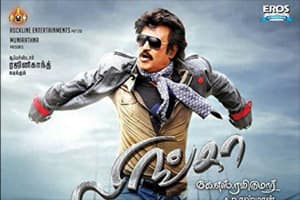 Like all his films, ‘Lingaa’ is basically three hours of Rajini Saar doing his thing. And it is three hours of full-on ‘masti’ and ‘mazaa’: no half-measures for the man who just has to walk across the screen in slo-mo to send his fans into paroxysms.

To watch a Rajini flick with subtitles is not quite the thing, I know. But even a non-Tamil speaker (I understand just a little, ‘konjum only’) like me gets the twinkle in his voice, which transfers from his eye, finds place in his dialogue, and goes down to his feet. What is completely, immediately infectious is that Rajinikanth takes himself not at all seriously: he knows you want fun, fun, fun, and that he dishes out in dollops.

With a name like ‘Lingaa’, the filmmakers are asking for risqué ‘lingam’ jokes. But the moment the film opens, with Rajini Saar playing a petty thief with big ambitions, you stop with the snigger. The biggest superstar in Tamil cinema lies comfortably in a prison cell, and you are once again up against the sincerity with which he does it. That’s it. You are, once again, instantly seduced.

After that there’s no hope for you as he swings into a pirate get-up (yes, that’s right), atop a computer-generated ship, and gyrates with Anushka Shetty next to him. That is Rajinikanth’s biggest gift: he makes you laugh with him, not at him, even when the film gets, as it inevitably does at this running time, both bloated and baroque in bits.

But you, by now, have discarded disbelief. So you are readily pulled along into the 1930s for Rajini Saar to show up in a double role, as a village collector who works under the British but whose heart beats only for his people. The ultra-busy plot takes in famine-ridden villagers, a river which needs a dam, a villainous Britisher (to hear him speak accented Tamil is a hoot), and a pretty teenager (Sonakshi Sinha), who loses her heart to this older Lingaa.

There’s also a palace, and treasure, and land-grabbing, and a greedy politician and bombs and a hot-air balloon. And a temple whose doors need to open only by the ‘real’ grandson of the original King Lingeswaram, who, presto, turns out to be thief.

But we know all of that is pure window dressing for Rajini to sing, and dance, crack wise, and beat up the villains. And also, to deliver lectures about the evil of caste and creed, which despite the schmaltz, feel so crucial and real, especially in our riven times.

What more do you want from a movie?