Koffee With Karan’s fifth season has been nothing short of spectacular so far and it looks like that streak will continue with the show’s upcoming episode featuring Anushka Sharma and Katrina Kaif. 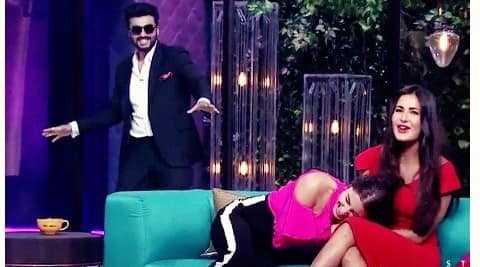 Anushka Sharma and Katrina Kaif made some interesting revelations on Koffee With Karan. (Twitter)

Koffee With Karan’s fifth season has been nothing short of spectacular so far and it looks like that streak will continue with the show’s upcoming episode featuring Anushka Sharma and Katrina Kaif. While Anushka and Kat have previously appeared on the show, this is the first time they’ll take the KWK couch together. But based on the teaser of the episode, which was released yesterday, we certainly hope these two actresses are paired together on the show many times in the future as well.

Seems like @karanjohar is having a meltdown while these two ladies set the couch on fire with their camaradarie & antics! #KoffeeWithKaran pic.twitter.com/dyiMuKTzzJ

The Jab Tak Hai Jaan co-stars are seen getting on famously in the short the clip. The NH10 actress even collapses into Kat’s lap at one point when she realises Arjun Kapoor is entering the stage. The Ki & Ka actor returned to the show for another round of Kiss With Arjun – the first installment of this segment took place during the episode with Ranbir Kapoor and Ranveer Singh.

Based on the clip, we’re expecting some interesting facts to be revealed on the upcoming episode. For instance, Kat reveals that that Arjun and Varun Dhawan made a club called I Hate Katrina Kaif. The highlight of the clip comes when Karan asks the girls if they’d prefer stability or passion in a relationship. Anushka then analyzes the question to death, to the point that Karan finally says, “Anushka, I don’t want to tell you anymore. I’m done with this question. I’m having a meltdown on my show for the first time.”

Well, that’s certainly something to look forward to. After the last episode with Aamir Khan, it seemed tough to top the actor’s back-and-forth with his Dangal daughters Fatima Sana Sheikh and Sanya Malhotra. However, based on this clip, we’re in for a laughter-filled episode, thanks to Katrina and Anushka’s amazing sense of humour.