Kingsman: The Knights in Shining Armour

A CORNER of a foreign field will be now for ever England. For there fell Colin Firth. 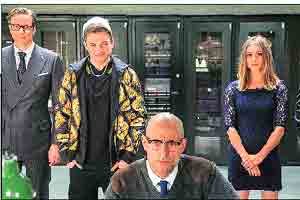 A CORNER of a foreign field will be now for ever England. For there fell Colin Firth. And in the cause of a sort-of spy film that is more wannabe-Jason Bourne than James Bond, even while professing Jack Bauer.

And yet it all begins so promisingly, featuring suits (as in Savile Row), shoes (as in “Oxfords, not Brogues”), umbrella (as in long, black, utilitarian), ring (as in worn on the little finger), and Guinness (as in the beer) — all on the person of Firth’s Galahad. He is part of an independent spy service set up by British peers and the like to keep the world a better place, and is now run largely by their descendants. The head is called Arthur, and its men and women take on the names of King Arthur’s knights.

Galahad, otherwise known as Harry Hart, takes it all very seriously. “A suit is a gentleman’s armour. A Kingsman is a modern-day knight,” he tells an impressionable young recruit from the boondocks in the course of a very short introduction. When Firth says it, Firth looks it, though we all know, of course, that young Eggsy (Egerton) is about to overturn at least some of the notions of this gentleman’s game. But just some.

However, to some relief, Vaughn, a friend and collaborator of Guy Ritchie, adapting the film from a comic book, doesn’t introduce the English eccentricities as a side joke. It is a constant throwback to bygone, gentler times, even if the set-up is intended as a sendup to the American megalomaniac villain of the piece. That would be zillionaire Valentine (Jackson), who slurs his words rather than deliver them in clipped accents, dresses up in a mix of colours, sneakers and a New York Yankees cap, and whose sole adornment is a necklace of beads with a Hindi Om dangling beneath. The Om is a lazy choice, there we suspect only because Valentine fancies himself as a sage acting solely out of concerns for global warming.

His real true accomplishment is his aide, constant companion and frequent murderer Gazelle (Boutella). With blades a la Oscar Pistorious for feet, she doesn’t need anything else to slice men in two (literally) than a leg raised high enough (and she can go high). Given his problems, Pistorious won’t enjoy this sight.

Unlike Ritchie, though, whose films are English by manner, Kingsman is just English in manners. Rest is a hotch-potch of blood, gore and some guiltily enjoyable acting (including by newbie Egerton).

Vaughn can’t be forgiven, ever, for putting Firth in a scene in Kentucky, America, where he stabs and slices through a church of fundamentalists gone crazy. Though Vaughn may find it harder to live down the string of heads that burst open in psychedelic colours some time later, to effervescent music.

However, Kingsman has its moments, and sometimes a very sly sense of humour. Valentine’s Big Mac served as a gourmet meal and what could be President Obama’s head are just a rap on America’s bruised knuckles compared to what Vaughn (the co-screenwriter) delivers as part of “Reagan’s Star Wars program”. A fellow Kingsman goes up into the stratosphere on a fancy chair, held aloft by two balloons, and fires a missile at a satellite.

She lives to tell the tale.