If Jazbaa pulls in the crowds on its opening weekend, it will most likely be on account of the fact that it is Aishwarya Rai Bachchan’s first film since 2010’s Guzaarish. 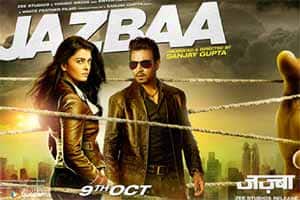 If Jazbaa pulls in the crowds on its opening weekend, it will most likely be on account of the fact that it is Aishwarya Rai Bachchan’s first film since 2010’s Guzaarish.

But if the film lasts beyond the first week and holds firm in the second, the reason will be Irrfan Khan.

Not only does the actor get the best lines and make the most of them, he demonstrates yet again why he is one of the Mumbai movie industry’s most formidable actors.

Sanjay Gupta’s crime drama is a middling mix of thrills and spills that is held together by Irrfan’s remarkable ability to inject life and meaning into even the most unconvincing of scenes.

That is not to say that Aishwarya does not do her bit to prop up Jazbaa. In fact, if anything, she goes overboard in the effort to make her presence felt.

In the frames that she shares with Irrfan, her melodramatic approach offers a direct contrast to the male lead’s measured underplaying.

Each serves as a counterfoil to the other, making Jazbaa feel like a two-in-one film in terms of histrionic styles.

Aishwarya plays advocate Anuradha Verma, a super-successful lawyer who has never lost a case. She is now in danger of losing her pre-teen daughter to kidnappers who want her to save a rape and murder convict from the gallows in lieu of ransom.

Old friend and tainted cop Yohaan (Irrfan), who has lost his job on charges of corruption, jumps into the fray to help the lady extricate herself from the tight spot.

Anuradha, who has only four days to secure bail for the rapist (Chandan Roy Sanyal), also has to contend with the ire of the victim’s mother (Shabana Azmi).

Jazbaa is the story of two daughters, one dead and crying out for justice and the other in the clutches of evil captors who cannot be trusted, and two mothers who have scores to settle.

The film creates a dark and twisted world inhabited by drug dealers and addicts, a powerful politician (Jackie Shroff) determined to save his career at all cost, and lawyers and cops who are hostages to a system that grinds down the meek and shields the guilty.

But Jazbaa, a remake of a South Korean thriller, does not go beyond broad superficialities. Its interest lies merely in mining the legal situation for its potential for suspense and intrigue.

The film achieves its end to a certain extent, but falls way short of delivering the riveting, edge-of-the-seat thriller that it should have been.

In the end, the surface zest visible in Jazbaa does not quite translate into the sort of fire that might have elevated it to a different plane.