Google Doodle remembers Nargis Dutt who died in 1981 of pancreatic cancer, a few days before her son Sanjay Dutt made his debut in Hindi films. 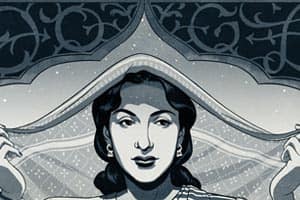 Google Doodle remembers Nargis Dutt who died in 1981 of pancreatic cancer, a few days before her son Sanjay Dutt made his debut in Hindi films. (Image: Google Doodle)

Nargis Dutt, born as Fatima Rashid, was a Bollywood actress who has done numerous commercially successful and critically appreciated films in a career than span 20 years, many of which paired her alongside Raj Kapoor. The actress also went on to become the first patron of Spastics Society of India in early 1970s and was nominated to Rajya Sabha in 1980.

Nargis married her Mother India co-actor Sunil Dutt in 1958 and had three children together: Sanjay, Namrata, and Priya. The actress died in 1981 of pancreatic cancer, a few days before Sanjay Dutt made his debut in Bollywood. At the premiere of Sanjay Dutt’s debut film ‘Rocky’ on 7 May 1981, one seat was kept vacant for her. In 1982, Nargis Dutt Memorial Cancer Foundation was established in her memory.

The actress made her screen debut as a child artist in Talash-E-Haq (1935). Her best known roles include that of ‘Radha’ in the movie ‘Mother India’, which also won her Best Actress trophy at the Filmfare Awards.

Follow us on
Latest News
Across the Aisle by P Chidambaram: Indianness is citizenship, not caste
Fifth Column by Tavleen Singh: Stop this violence
Over the top by Meraj Shah: Till kingdom come
Telcos upset with DCC nod to Trai 5G base price
Govt is biggest litigant, says CJI NV Ramana
PM Modi for tech in judicial system
FEMA violations alleged: ED seizes Rs 5,551 crore deposits of Xiaomi
Most Read
Total outstanding borrowings at Rs 4,543 crore: Future Enterprises
YES Bank says on track to set up ARC, on lookout for partners
Travel without a footprint: Sustainability is the need of the hour, and more so when it comes to travel
Yes Bank posts Rs 367-crore profit in March quarter
Photos
India battles extreme heatwave! Pictures from across India show people reeling under scorching heat
1 day agoApril 29, 2022
CBSE class 10 term 2 Board Exam – Check photos of students across India outside examination centres
4 days agoApril 27, 2022
Bhalswa landfill fire in Delhi: 15 hours on, firefighting operations underway – See photos
4 days agoApril 27, 2022
Read More
×
A dose of laughter: Here we bring you a list of popular comedians of all times
Pop singer Taz of Stereo Nation passes away at 54
Akshay Kumar shares first glimpse of ‘Ram Setu’; movie to hit theaters this Diwali
Here’s what Abhishek Bachchan has to say on ‘pan-Indian films,’ calls it ‘unfair’ to say Bollywood is lagging
Shah Rukh Khan’s house Mannat trends on Twitter, know why
Amid buzz over Takeshi’s Castle reboot, this is what Jaaved Jaaferi has to say about the game show