Fitoor movie: All you wanted to know about Katrina Kaif starrer without actually watching it in 5 points

Fitoor (release date Friday) movie that stars the stunning Katrina Kaif and the hunky Aditya Roy Kapur is one of the most anticipated movies in Bollywood and is expected to do better than last week’s release Sunny Deol’s Ghayal Once Again, which fared about average. 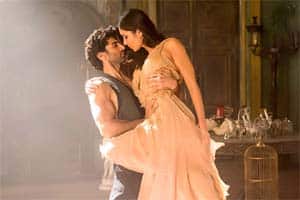 Will Fitoor movie live up to its 'great expectations' billing or will it turn out to be a let-down? Check out teh top 5 aspects of the movie that released Friday.(Bollywood Hungama)

Fitoor (release date Friday) movie that stars the stunning Katrina Kaif and the hunky Aditya Roy Kapur is one of the most anticipated movies in Bollywood and is expected to do better than last week’s release Sunny Deol’s Ghayal Once Again, which fared about average. Katrina Kaif has a legion of fans and has been in the news for various reasons, especially her personal life, and they would be eager to see her again. But the big question is will Fitoor live up to its ‘great expectations’ tag? So, here we provide a look at the top 5 points about what the movie is about without you actually having watched it:

1. Fitoor is based on a classic novel, the tragic magnum opus ‘Great Expectations’ by Charles Dickens – from forbidden love, to betrayal and class struggle, the novel has been wowing the world for over a 100 years. Fitoor has a starcast that boasts Katrina Kaif, Aditya Roy Kapur and Ajau Devgn.

2. Fitoor starts off with a flashback that shows the childhood of a young Kashmiri boy Noor Nizami and his ‘blink-and-you-miss’ tryst with a random stranger (Ajay Devgn), who turns out to be a certain Mirza Baig eventually. One day, when Noor accompanies his brother-in-law to the nearby Begam’s (Tabu) palace for some carpentry work, he sees a girl there – Firdaus Jaan Naqvi. Because, she takes a ‘liking’ for Noor, he gets hired as the stable caretaker. Gradually, the duo start liking each other’s company. One day Noor comes looking for Firdaus at her palace when Begum informs him that she has been sent away to London for further ‘education’.

3. Fitoor quickly shifts gears and moves from flashback mode into fast forward. A few years down the line a grown up Noor (Aditya Roy Kapur) leaves his hometown to move to Delhi to build his career as an artist. As luck would have it, Noor meets Firdaus (Katrina Kaif) at a party and this time round, they try to ‘complete’ their ‘incomplete’ love.

4. But then the drama sets in. Firdaus confesses to Noor that she will soon get married to an upcoming Pakistani politician Bilal (Rahul Bhatt). The level of obsession that Noor has for Firdaus reaches crazy heights. Will Noor let go of his childhood love Firdaus, will Firdaus have a change of heart and leave Bilal and get married to Noor or does the ‘Machiavellian’ Begam have a way different plan for Firdaus is what forms the rest of the film.

5. Fitoor’s lead pair Aditya Roy Kapur and Katrina Kaif have the entire responsibility of carrying the film on their ‘able’ shoulders – it has been billed as an emotional roller-coaster rise. Great visuals mark the film out.