Filmi touch! Bollywood is the latest flavour for kids’ broadcast

From cartooning mythological figures such as Hanuman, Ganesha and Bheem, kids’ channels are now borrowing concepts and characters from popular Bollywood movies. 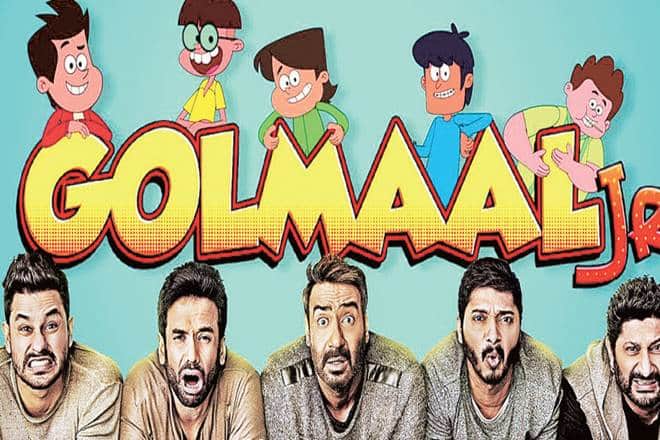 Viacom18 followed suit with the launch of its eighth Intellectual Property (IP) Golmaal Jr. This show is based on the popular comedy franchise Golmaal, made in association with the same production house (Rohit Shetty Picturez).

The kids’ entertainment genre on television is finally evolving. From cartooning mythological figures such as Hanuman, Ganesha and Bheem, kids’ channels are now borrowing concepts and characters from popular Bollywood movies. For instance, Discovery Kids launched Little Singham (based on the popular Singham movie starring Ajay Devgn) in collaboration with Rohit Shetty Picturez and Reliance Animation last year. This show elevated the channel to the number two position within the genre last May. Viacom18 followed suit with the launch of its eighth Intellectual Property (IP) Golmaal Jr. This show is based on the popular comedy franchise Golmaal, made in association with the same production house (Rohit Shetty Picturez).

This trend goes back to 2013 when Turner International India launched its IP — Kid Krrish, a film series, produced by Toonz Animation and Film Kraft Production on Cartoon Network. It was well-received by audiences and the network went on to make sequels like Kid Krrish: Mission Bhutan and Kid Krrish: Mystery in Mongolia followed by an animated version of Sholay as Sholay Adventure in partnership with Graphic India and Sholay Media and Entertainment on Pogo in 2015. It was a four-part animation film which introduced iconic character Jai, Veeru and Gabbar in kids’ avatar.

It’s clear that Bollywood is turning out to be a favoured theme among kids. Uttam Pal Singh, head of Discovery Kids, reasons that brand Singham has a great pull and this has worked for the kids genre.

“Also, kids connect with an authority figure like a cop. Hence, content based on a film like this makes a winning formula for us,” he adds.

But why the need to experiment with Bollywood and not a new character altogether? Singh explains that a new role comes with its own set of challenges. It takes almost a year to produce an animated show and introducing a new character to the audience takes time. “Conversion rate is higher in case of an established IP,” he says. Furthermore, Singh says instead of criticising this trend for lack of experimentation, it should be used to derive higher success. “While there is little experimentation, you also want to improve your chances of success. And why not?” he reasons.

Nina Elavia Jaipuria, head of Hindi mass entertainment and the kids TV network, Viacom 18, believes that the movies come and go away in a couple of weeks and months but shows like Golmaal Jr or Little Singham in animation have a long shelf life. “The incremental viewership that these shows garner lead to better return on investment,” she notes.

A decade ago, the Indian animation industry for television became obsessed with mythological shows on TV channels. This happened for two reasons: firstly, the makers were not sure whether they had developed expertise in telling animation stories to kids, as all the players were largely dependent on international content. Secondly, it was a good place to start experimenting by retelling a story which was already known.

As per industry estimates, the kids’ genre is worth Rs 600 crore. The average cost for producing 2D or 3D animated content is around Rs 20-25 lakh per episode for a show of 11-22 minutes. The shows that attain higher viewership usually cost between Rs 40-50 lakh. If the content is produced for international markets, the investment can go up to Rs 100 lakh per episode.

The idea is to create a successful character based on a franchise product with a high success rate because it has an inherent fan following. “The effort of creating a fan base reduces when you have a show based on a film,” says Ashish Pherwani, partner, and media and entertainment leader, EY India.