‘Dirty Politics’ even achieves the dubious distinction of managing to make the versatile Naseeruddin Shah and Anupam Kher look clueless. 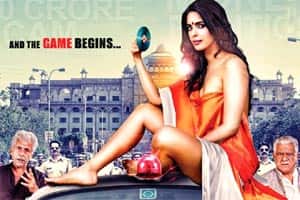 There was really no reason for me to drag myself off to see ‘Dirty Politics’, especially on Holi, other than to check on Mallika Sherawat. I whizzed past pals splashing ‘gulal’, dodging enthusiastic kids and their coloured-water-filled balloons to see how many shades Mallika Sherawat had left on screen. The last time K C Bokadia did something worth watching was more years back than I can remember.

This was the actor who sizzled her way up the Bollywood ladder, and left it to hang out with Jackie Chan, before heading out to scout for potential Hollywood blockbusters. She was last seen in the avatar of a “sorry serpent”. She disappeared before reincarnating as Anokhi Devi (shades of Bhanwari Devi?) from Rajasthan. A not-very-educated dancing girl whose charms catapult her from stage, prancing about in a ghagra as a small-time dancer, to the political arena where she makes men sing, swing and dance to her tune.

There was a time Ms Sherawat showed flashes of brilliance, displaying potential to move beyond the stereotyped bimbette she usually plays. ‘Dirty Politics’ is certainly not the redeeming vehicle. She twirls about in her ‘ghagra’ as Om Puri plays the lecherous “dirty old man” to the hilt, and the camera plays the voyeur.

The movie, however, achieves a dubious distinction. It manages to make the versatile Naseeruddin Shah and Anupam Kher look clueless. The film is supposed to put the spotlight on how politics is the preserve of perverts and goons and how men in power prey upon women. (Jackie Shroff as a kohl-eyed bad guy muttering threats is hilarious, and just one of the unintentionally funny elements),

Dialogues left me guffawing, not because of any real humour, but because there was nothing else I could do. Puri, bends over Sherwat and says “You know how a tiger attacks?” and Sherawat bites his ear and responds: “kaat khaaongi”. Bland or base? Easy to decide.

Sherawat is then made to pull out the ‘ch.’ word from her arsenal and yell it. She had her Hollywood moment though. She was allowed to a Sharon Stone-style crossing of her legs, seated on a throne (she is a Mallika after all, and deserves a throne).

That was it. Me, I’m off to grab the leftover gujiyas and thandai.