Kick starting the year 2016 for Bollywood is the Amitabh Bachchan starrer and Bejoy Nambiar directed Wazir. 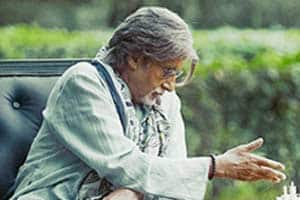 Wazir stars the indomitable Amitabh Bachchan and that bodes well for the film right at the outset. And Big B is kept able company by Farhan Akhtar. (Bollywood Hungama)

Kick starting the year 2016 for Bollywood is the Amitabh Bachchan starrer and Bejoy Nambiar directed Wazir. The biggest question about Wazir is whether it has the power to overcome its competition? It stars the indomitable Amitabh Bachchan and that bodes well for the film right at the outset. And Big B is kept able company by Farhan Akhtar – Wazir looks to be the only film that has chess as its central theme after the cult film Shatranj Ke Khiladi. So, here is all you wanted to know about Amitabh Bachchan’s Wazir in 5 points without actually having seen the movie:

1. Wazir is loosely based on a somewhat popular rule in the game of chess: ‘If you find a good move, look for a better one’. Wazir’s screenplay (Bejoy Nambiar and Abhijat Joshi) takes the viewers through a gamut of emotions throughout the film.

2. Wazir starts off with the ‘musical introduction’ of a dynamic ATS officer Danish Ali (Farhan Akhtar), his wife Ruhaana (Aditi Rao Hydari) and their only child Noorie. One day, when Danish is out with his family, he spots a dreaded terrorist Rameez (Naseer Husain). What follows is a series of chase sequences, which results in the death of Noorie. Completely shattered by the death of his child, a mentally disturbed Danish Ali ends up ‘eliminating’ Rameez, which results in him being suspended from his service.

3. Unable to bear the grief, one day, just as he is about to kill himself, there enters into his life a chess champion named Panditji aka Omkar Nath Dhar (Amitabh Bachchan). He teaches Danish the ‘similarities’ between the ‘game of life’ and the ‘game of chess’. Gradually, the two become good friends and start spending time over drinks and chess.

4. Panditji reveals to Danish that his daughter was murdered by the politician Yazaad Qureshi (Manav Kaul) and that he is waiting to take revenge for the same. Danish joins Panditji in his battle against Qureshi. As days pass, Just when Danish’s plans to eliminate Qureshi are about to be implemented, Panditji gets ‘attacked’ by a mysterious villain named ‘Wazir’ (Neil Nitin Mukesh).

5. What happens at the end is something that turns Danish Ali’s world upside down. Who is the real ‘Wazir’, what happens to Panditji in the end, does Danish Ali become successful in eliminating Qureshi is what forms the rest of the film.

Take the poll, tell us what kind of rating does Amitabh Bachchan’s newest movie Wazir deserves: