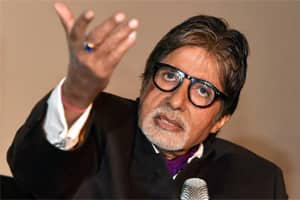 Bachchan, 72, who is known for his impeccable fashion sense, took to Twitter to inform about the same.

“At night… Fashion and glamour and style takes over and decorates you with Timeless Fashion Icon Award! Time to Timeless!,” he tweeted.

“Thank you #CirocFilmfareGlamourAndStyleAward for the Emerging face of fashion award!I hope to live up to the expectations. @filmfare,” she tweeted.

Sonam Kapoor, who looked beautiful in a blue gown, won two awards – Trendsetter of the Year Award and Most Stylish Star (Female).

Filmmaker Karan Johar, who is all set to make his acting debut with ‘Bombay Velvet’, was honoured with the Most Glamorous Director award.

Whereas Abhishek Bachchan and Aishwarya Rai Bachchan took home the Most Glamorous Real-Life Couple award. Aishwarya was also named the Global Icon of the Year (Female).