With Aamir Khan’s ‘PK’, Rajkumar Hirani is back in the multiplexes after a five-year hiatus and the wait has been worth it. 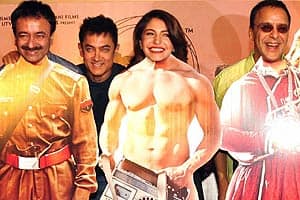 With Aamir Khan’s ‘PK’, Rajkumar Hirani is back in the multiplexes after a five-year hiatus and the wait has been worth it.

‘PK’, the writer-director’s fourth directorial venture, is a wonderful piece of cinema that, pretty much like his much-loved Munnabhai films, blends heart and head with commendable mastery.

‘PK’ is a fearless critique of religious bigotry and the ways of India’s proliferating godmen, but the film’s message is shorn of rancour and bitterness.

It is instead cloaked in humanity and humour, which accentuates its impact no end.

The screenplay, written by Hirani and Abhijat Joshi, takes make-believe elements on one hand and draws upon the realities of our times on the other to deliver a fantasy so unique and original that it takes your breath away.

‘PK’ delivers an entertaining tale that touches upon the social and political ills that plague us but it does so without falling out of line with the need to keep the story simple and straightforward.

‘PK’ is a film that restores one’s faith in the much maligned Bollywood idiom.
It demonstrates that the so-called cliched conventions of Mumbai’s popular cinema can, in hands as able as Hirani’s, yield entertainment of the very highest pedigree.

The film opens in the desert of Rajasthan where a stark naked alien (Aamir Khan) alights from a spaceship looking lost and forlorn.

He belongs to a planet where clothing is unheard of and words as we earthlings know them are redundant because its inhabitants need nothing more than pure thoughts to communicate.

A theft leaves him stranded and the extra-terrestrial begins a search for the remote control device that he needs to communicate with his spaceship.

He learns how to survive on our hostile planet, but what he imparts to those he meets along the way is far more valuable than anything that the latter can give him.

‘PK’ is a film that is marked by purity of vision and precision of storytelling. It is funny, feel-good and thought-provoking.

Thanks to the finely etched characters that they are called upon to play, the actors have their jobs significantly simplified.

They do not need to rise above the level of the writing. The benchmark is set for them, and they simply have to ensure that they measure up.


All of them do just that. Aamir Khan is of course the dynamo that propels the narrative, but Anushka Sharma, too, gives it her best shot.

Sushant Singh Rajput plays only a minor role in the film as the heroine’s Pakistani boyfriend from her days in Bruges, Belgium, but he makes the most of the limited opportunities that he gets.

The villain in ‘PK’ isn’t your average Bollywood baddie. He is a godman who thrives on the incredulity of his followers, but when confronted with the prospect of being shamed on the set of a television show, he does not unleash a battery of goons as such characters are wont to do in a Hindi movie.

‘PK’ is, after all, a Rajkumar Hirani film, and nothing that it delivers hinges on devices that have done to death. It springs surprises at every turn, not the least among of which is a very special appearance by Ranbir Kapoor.

This is an absolutely unmissable mass entertainer, if ever there has been one. It is unlikely that you will ever be more entertained and more enlightened both at the same time by a Bollywood film.