Dangal has met with immensely favorable reviews from most quarters, but even Aamir Khan’s film about women empowerment couldn’t escape without some controversy hitting it. 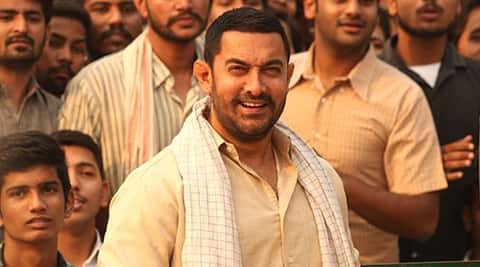 The hashtag of #BoycottDangal is trending because of Aamir Khan's comment on intolerance. (Bollywood Hungama)

Dangal has met with immensely favorable reviews from most quarters, but even Aamir Khan’s film about women empowerment couldn’t escape without some controversy hitting it. As Dangal hit theatres today, the hashtag of #BoycottDangal began to trend on Twitter with all kinds of explanations about not supporting ‘anti-national’ Aamir’s movie. A quick scroll through Twitter will show some of the outrageous reasons people have listed to skip a film that has been hailed as a masterpiece.

Anti-national Aamir: “Lets #BoycottDangal & teach lesson to actors insulting our country by remarking #intolerant,” one person wrote in reference to the actor and his wife Kiran Rao’s comments about intolerance in India last year. Let’s not forget that Dangal’s moment featuring the national anthem has choked up enough audiences, so maybe this argument falls through.

I was the big fan of @aamir_khan. But after his intolerance remark, I am not going to see any movie of him #BoycottDangal

Earned with our money and finally started anti India #BoycottDangal

Anti-Hindu Aamir: “Dear Hindus, don’t forget the insults heaped by Aamirkhan on our Gods in PK
If you continue to watch then, he will continue. #BoycottDangal,” was another Twitter user’s comment. Come on, PK took a look at many religions in a humorous yet critical manner.

Anti-feminist Aamir: “Divorces hindu wife & marries another hindu girl in real life Talks about Women Empowerment in movies. Anybody for this crap? #BoycottDangal.” another person tweeted. Well, clearly, according to Dangal’s bookings so far, not everyone shares this point of view.

Bhakt’s are against #Dangal just because it glorifies women’s. Glorifying women over male is against hindutva ideology… #BoycottDangal

Dear Indians, please #BoycottDangal. It gives you anti-national ideas such as “girls are equal to boys”. Can’t let this virus spread.

You can also watch:

Mr Perfectionist may have his detractors, but going by Dangal’s opening day bookings, we’re guessing he’s going to be laughing all the way to the bank. Dangal has done immensely well not just in India, but even Canada and the US where it was screened on Wednesday. The film has gone on to earn around Rs 2 crore in North America and given its performance in the domestic box office, not everyone shares the #BoycottDangal sentiment. Carry on, Aamir!