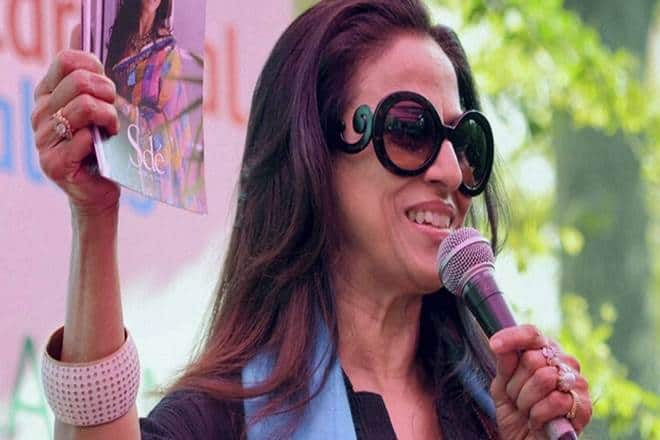 Columnist Shobhaa De was once again trolled on Twitter for her tweet, which attempted to mock an overweight policeman, she seemingly thought was a Mumbai Police personnel. The author, who voted today during BMC polls, posted a picture of an extremely obese police personnel, and wrote: “Heavy police bandobast in Mumbai today.” The tweet backfired at Shobhaa as Mumbai Police immediately issued a demolishing response to the author. Mumbai police tweeted: “We love puns too Ms De but this one is totally misplaced. Uniform/official not ours. We expect better from responsible citizens like you.” It seemed that the personnel, whose picture was tweeted by Shobha, didn’t belong to Mumbai police. This fiasco once again led to immense Twitter trolling of De, who was earlier trolled for mocking Indian athletes at Rio Olympics and advising EAM Sushma Swaraj to tweet ‘less’.

We love puns too Ms De but this one is totally imisplaced. Uniform/official not ours. We expect better from responsible citizens like you. https://t.co/OcKOoHO5bX

Here’s how some of the Twitter users responded to Shobhaa

@DeShobhaa time for some psychiatric counseling

@DeShobhaa if I zoom in the photo, I can see M.P. police written on his badge.Don’t keep tweeting nonsense. N yes, it amount to body-shaming

@DeShobhaa Kudos on the effortless body shaming, celebrity lady who is subject to unfair criticism about her looks and body. ????

De, in a tweet on Foreign Minister Sushma Swaraj, had advised her to “tweet less” leaving many twitteratis upset. Trolling Shobhaa, many Twitteratis had asked Ms De to follow the same “resolution”.  Ms De had tweeted, “Sushma Swaraj : Resolution for 2017 – Keep calm and stop tweeting.”  Shobhaa’s ‘resolution’ clearly didn’t go well with Sushma’s followers, who admire her gestures and frequent responses to queries made on social media.  Sushma is quite active on Twitter and have won plaudits for her responses to people to people in distress.

Follow us on
First published on: 21-02-2017 at 22:55 IST
Latest News
Countdown to Aero India | For India, From India, for the World: Lockheed Martin reaffirms its commitment to India
These four concepts will help you understand blockchains
World Cancer Day: It’s still a long way to go for cancer care in India
Gold ETFs could be an ideal way to invest in gold
Energy transition, inflation and rise of Emerging Markets: A spotlight on what to expect in 2023
Fiscal support to digital infrastructure to aid India’s growth story of becoming a $5 trillion economy by 2025
Colorectal Cancer – Why early diagnosis can be life-saving!
Photos
Samsung Galaxy S23 Ultra is not the first 200MP camera phone: Here are 5 smartphones that did it first
19 hours agoFebruary 3, 2023
Budget 2023: FM Nirmala Sitharaman matches her outfit with the Bahi Khaata Tab; See Photos
3 days agoFebruary 1, 2023
In Pics: Amid rain, Beating the Retreat ceremony held at Vijay Chowk, marks the end of Republic Day celebrations
6 days agoJanuary 29, 2023
Read More
×
Tripura elections 2023: CPI(M), Congress announce alliance in major shake-up of political landscape
Himachal Pradesh govt formation: Congress to hold meeting of newly-elected MLAs in Shimla 
AAP on course to become national party, gratitude to people of Gujarat: Manish Sisodia
Amit Shah says Gujarat verdict people’s rejection of ‘revadi’ politics, hails voters for unwavering faith in Modi
Bhupendra Patel to take oath as Gujarat CM on December 12, PM Modi, Amit Shah to attend
Who will be next Himachal CM? A look at the contenders as Congress breaches majority mark
Switch to Hindi Edition