Will support GST if states are fully compensated: Mamata Banerjee

The West Bengal government would support the GST Bill only if the states were fully compensated for the revenue loss.. 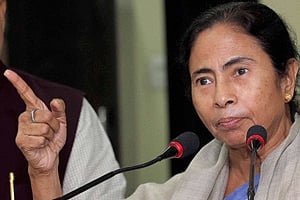 The chief minister said while replying to a question if any action would be taken against cow vigilantes. (PTI)

The West Bengal government would support the Goods and Service Tax (GST) Bill only if the states were fully compensated for the revenue loss, Chief Minister Mamata Banerjee said today.

“States are concerned that their revenue generation should not fall… If you collect Rs 40,000 crore from our state and give us Rs 8,000 crore and say the Centre is giving it, we don’t support this. After all this is the money of our state,” Banerjee told reporters here.

“GST is in our manifesto, we have committed to support it. But we cannot support it in this form as it will harm the states’ interest. States should be fully compensated,” she said, indicating that some provisions of the legislation were not in the interests of the states.

Her remarks came on a day when the GST Bill, touted as the single biggest indirect taxation reforms since Independence, was introduced in the Lok Sabha.

Finance Minister Arun Jaitley, however, said in Parliament that concerns of all states have been taken care of and measures would be taken up in the next Parliament session.

The Trinamool chief said the Centre “should allow states to collect their own tax, not collect it on states’ behalf. We are fighting for all states not for Bengal alone.”

She said her government had objected to the proposed inclusion of petroleum products, tobacco and entry tax in the ambit of the GST and wanted them to be excluded.

“The present form of GST Bill is not what was decided unanimously earlier by the Empowered Committee. When something is decided unanimously, it must be respected. You cannot bulldoze just because someone is in a majority,” Banerjee said, indicating the ruling BJP.

Maintaining that there was a promise of adequate compensation to states, she said “you are deviating what was decided earlier. It is against federal structure… The states’ views should be heard.”

The decisions taken at July 3 meeting were that petroleum products, tobacco and entry tax should not be subsumed under GST and the Centre’s share in inter-state supplies of goods and services should be part of divisible pool and devolved to the state as per the Finance Commission formula, Mitra said.

Banerjee also blamed the erstwhile Left Front government, for the financial “crisis” being faced by West Bengal, saying “because of the last government we are facing serious financial crisis. So do some justice to us.”