State Bank of India (SBI) chairperson Arundhati Bhattacharya stated that the bank will also start dispensing 50 and 20 Rupee notes in coming days to help the public. 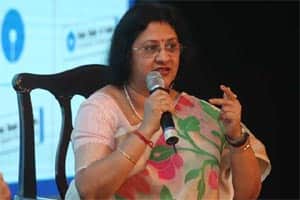 Speaking to ANI here, the SBI Chief stated that in all of their branches in the southern states, the workload has dropped to almost 50 per cent. (Express Photo by Dilip Kagda)

Assuring that the panic among masses is on the decline following the more constant flow of cash at banks and ATMs, State Bank of India (SBI) chairperson Arundhati Bhattacharya stated that the bank will also start dispensing 50 and 20 Rupee notes in coming days to help the public.

Speaking to ANI here, the SBI Chief stated that in all of their branches in the southern states, the workload has dropped to almost 50 per cent, which is a sure sign that people are assured that they will receive the money at their own convenience.

However, talking about the inconvenience caused to the masses with ATMs running out of cash soon, Bhattacharya added that ATMs are emptying out fast because it has a fixed space for notes of 100 and also the dimension of the new notes has changed, adding that the holding capacity in the ATM is confined.

“But what takes most time is manual recalibration. A person has to come and physically add the money when it runs out. We hope and are trying that we can sort of this problem by end of November. And if the chaos subsides by then, then we will also start dispensing 50 and 20 rupee notes in coming days,” she said.

Meanwhile, the government has set up a special task force headed by Deputy Governor of RBI to expedite the process of re-calibrating the ATMs to make them fully functional, which will work with different banks in this direction.

Addressing the media in New Delhi about Prime Minister’s last night meeting to review the demonetisation and its impact, Economic Affairs Secretary Shaktikanta Das said the ATM re-calibration has started and some of the ATMs will start dispensing higher denominations, including 2000 rupee notes, from today or tomorrow.

ATM limit has also been increased to 2,500 rupees, however it will be disbursed only by the re-calibrated ATMs.

Saying that there is no need for public to panic, Das assured that there is enough cash available in the system and situation will ease in coming days.

The toll tax will not be collected till the midnight of 18th November to ensure smooth traffic movement across all national highways.

On Sunday night, Prime Minister Narendra Modi held a meeting at his residence with senior ministers past Sunday to review demonetisation and its impact.

Cash withdrawal limit at ATMs was hiked to 2,500 rupees from 2,000 rupees a day. The weekly limit of 20,000 rupees for withdrawal from bank counters has been increased to 24,000 rupees.

The Ministry in a statement said that the maximum limit of 10,000 rupees per day on such withdrawals has been removed. The Finance Ministry has also extended the last date for submission of the annual life certificate for pensioners from November to 15th January next year.