We have to do better to convey that pro-reform is good for ordinary citizens: Richard Verma, US Ambassador to India

At the Express Adda held in Delhi last week, US Ambassador Richard Verma spoke to The Indian Express National Editor (Strategic and International Affairs) Praveen Swami on his immigrant roots, the changing US world view, and how strategic cooperation remains the bedrock of Indo-US relationship. 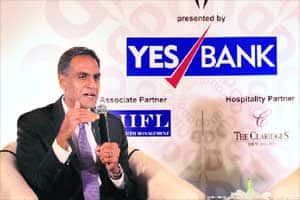 The latest edition of Express Adda, presented by Yes Bank in association with IIFL and The Claridges, was held in Delhi last week. US Ambassador to India Richard Verma spoke to The Indian Express National Editor (Strategic and International Affairs) Praveen Swami on growing up in America, staying connected with India, the evolving India-US relations and the Indian government’s crackdown on NGOs.

This past month marked a bit of a milestone. We crossed over the 10 year threshold from when the US-India civil nuclear agreement was signed and a lot of people say, well, you haven’t built a single nuclear power plant yet, so this must be complete failure and I would argue it’s been quite the opposite. It’s actually been quite transformational and the relationship has been quite transformational. And I thought, instead of just having me convince you of that, I would give you a few numbers so you can assess for yourself if things have changed. US investments in India in 2005 were 7.7 billion, last year they were 28 billion; two-way trade between India and US in 2005 was 36 billion dollars and last year it was a 104 billion dollars. In 2005, there were 85 Indian companies operating in the US. Last year, there were well over 200 Indian companies. I could go on and on. It’s important to look at the data and see for yourself where the relationship has gone. And, obviously, we will have months or weeks where people think it’s not going so well, but if you look at the 10 years, it’s actually gone pretty well. So, where does that leave us now? We continue to build our several key areas. First and foremost, strategic cooperation remains a bedrock of our relationship, so the defence, the intel sharing, the military exercises, the co-production, the co-development. We are at a fundamentally different level of security partnership with India than we have ever been before.

As for economics and trade, we are pushing hard to reach that 500 billion dollar goal in two-way trade. And I really think we can get there. And I believe we can talk tonight about all the issues that need to be resolved. And the ease of doing business and economic reforms, but ultimately that category is not just so that businesses can do better, it’s so that Indian people and American people can have a better way of life. Two giant democracies, two giant economies coming together can have a really positive impact for people throughout the economic pyramid. We are fundamentally lined up to support India’s aspiration to be a leading power in the world. Not just a balancing power, but a rising power. We want India to be a global strategic player, political player, economic player. We want it to have a seat in the UN Security Council, to be in export control regimes, to be active members in G20 and WTO.

On Pakistan and combating terrorism

Fighting terrorism is a big component of our cooperation, that means sharing intelligence and operating together. We do this to protect the values that we hold so dear. Our policy in Pakistan is designed to see some degree of stability and some degree of peace for people and to ensure that this insurgency that threatens the people of Pakistan, that threatens free people across the border, can no longer threaten people. And so certain tools are required. I look back at our assistance levels in Pakistan last year and the vast amount of assistance was on the civilian side, on health infrastructure, on education, to bolster the civilian elements of society and yes, there was a defence component as well to help give Pakistan the tools to combat insurgency. I understand the tension but I think it’s in no one’s interest for chaos to reign. The President also said some other things when he was here, which is that safe havens, wherever they are, including in Pakistan, have to be shut down and that perpetrators of terrorism have to be brought to justice and that includes those of the Mumbai attacks.

On the government crackdown on NGOs

When I made my comments about this subject, it was because both of our countries have such a vibrant tradition in civil society, and there are two million NGOs operating in India — far more than in the US. I also said it’s critically important for NGOs to be legally compliant, be regulatory compliant but let’s not send the message to those NGOS, including the one (anti) child trafficking NGO whose founder was a Nobel Prize winner… So you think about the work NGOs are doing on health, on education, on literacy, on environment, let’s make sure they all feel welcome.

We have had a very constructive dialogue on this (with the Indian government) and I am hoping that we will continue to have that dialogue and move in the right direction. Ultimately, these are questions for the people of this country to resolve. We can have a view, but the space that is given to the civil society, to NGOs, is a question for the people of India to resolve.