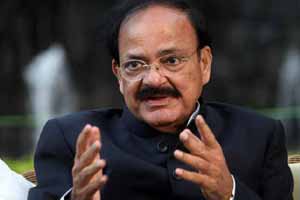 Venkaiah Naidu said rules and regulations have to be followed for taking up any issue in Parliament and the opposition should be aware of it. (Express Photo)

The government is trying to build a consensus to call an extended monsoon session to take up the Goods and Service Tax Bill, Parliamentary Affairs Minister M Venkaiah Naidu said on Tuesday.

The minister said passing the bill was more important given the current global economic situation.

“We are meeting all political parties and trying to create an agreement over an extended monsoon session,” Naidu said at a press conference here.

“I hope a consensus will be reached,” he said.

The minister also made an appeal to all political parties to “act in national interest”.

“I appeal to all parties, act in national interest by respecting the mandate of people. If some parties want to oppose any legislation they have all right to do so but it is undemocratic to stall the house and not allow taking up bills which are of paramount national interest,” said Naidu.

“This is even more important in the backdrop of current economic situation across the globe,” he added.

While the two houses of parliament were adjourned sine die on Aug 13, they were not prorogued, leaving the way open for their being reconvened, specifically to pass the GST bill.