US Fed policy decision: US FOMC may hike interest rate by 75bps, remains committed to bring inflation down

Expect a 75bps hike in the upcoming US FOMC meet on Sept 20-21 (followed by two more rate hikes at least) and now forecast a terminal Fed fund rate at 4-4.25%. 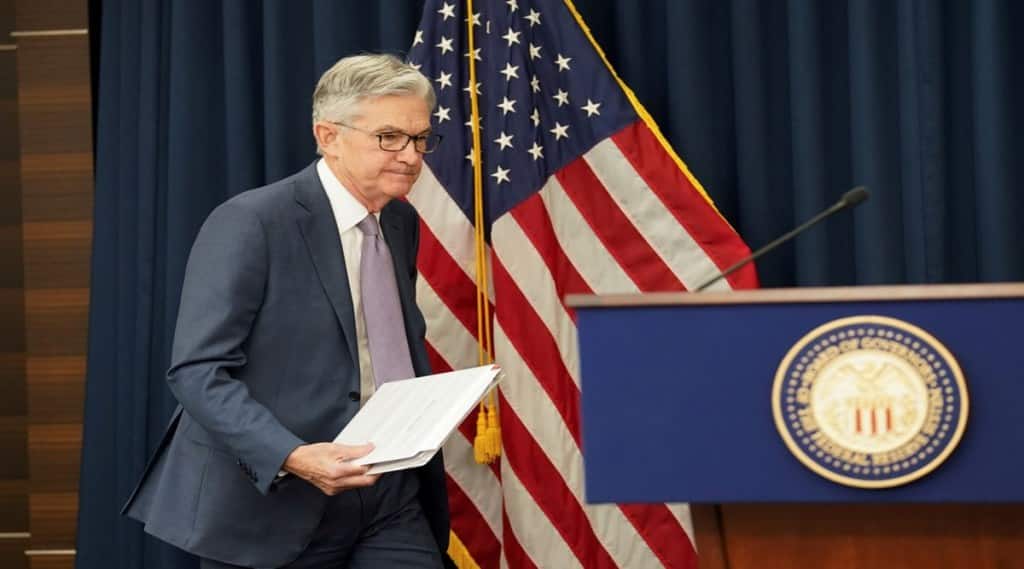 Federal Reserve officials have made it very clear that they will not slow the pace of rate hikes until they see convincing evidence that core inflation pressure is easing. Image: Reuters

The US Fed is caught in a quandary, whether to target inflation or be concerned about slowing economic growth. On one hand, inflation is ruling at four decade highs, the job market is strong and consumer spending solid. On the other hand, there are signs of the economy slowing and might even end up in recession. Fed Chair Jerome Powell and his colleagues have already raised borrowing costs faster this year than at any time since the 1980s to fight decades-high inflation. Powell, in his speech at the Jackson Hole admitted that there will be consequences of high interest rates on the labour market and economic growth.

Powell also reiterated that the Fed remains committed to bringing inflation substantially down, thus signalling continued rate hikes by the central bank in the upcoming meetings, despite running the risk of recession. Latest inflation print removed uncertainty over 50bps or 75bps rate hike.

Consumer price index report showed monthly CPI for August increased at an annual pace of 8.3%, more than economists’ median estimate of 8.1%, cementing bets of a large 75 bps rate hike from the Federal Reserve in the upcoming meeting. A steep decline in gasoline prices helped cool inflation; but costs for food, housing and autos continued to soar. Food costs increased 11.4% from a year ago, the most since 1979. Electricity prices rose 15.8% from 2021, the most since 1981. Gasoline prices, meanwhile, fell 10.6% in August, the biggest monthly drop in more than two years. Shelter costs, which are the biggest services’ component and make up about a third of the overall CPI index, continued to rise. Overall shelter costs increased 0.7% from July and 6.2% from a year ago, both the most since the early 1990s.

Core CPI, which excludes energy and food prices, increased 6.3% in August from a year earlier (higher than market expectation), up significantly from the 5.9% rate in both June and July; signalling continued strengthening in broad prices. Rise in core CPI confirms the very sticky nature of the US inflation problem and is perhaps a reflection of feed-through (second order effects) of higher energy prices from earlier this year. Prices are no longer rising mainly because a few categories shot up or because of higher energy prices; it is fuelled by a strong job market. The price gains have become increasingly demand-driven. The Federal Reserve is hoping to slow a labor market that has posted solid job gains through the year.

Latest inflation report even led some analysts to speculate that the central bank could announce a full percentage point hike. If it did, that would amount to the largest increase since the Fed began using short-term rates in the early 1990s to guide consumer and business borrowing. Elevated and widespread price pressures are pointing to a long road ahead towards the Fed’s inflation target and the market now anticipates a terminal rate in the range of above 4%.

Federal Reserve officials have made it very clear that they will not slow the pace of rate hikes until they see convincing evidence that core inflation pressure is easing. More rapid pace of interest rate increases would slow the economy, the Fed may yet stick to a so-called soft-landing, lowering inflation but avoiding a severe downturn. Yet this seems difficult in the light of inflation remaining higher than expected. With a resilient labor market supporting strong wage growth, inflation has probably not begun its downward journey; keeping the Fed on an aggressive monetary policy path for a while. We expect a 75bps hike in the upcoming FOMC meet on Sept 20-21 (followed by two more rate hikes at least) and now forecast a terminal Fed fund rate at 4-4.25%. Global Bond and Equity markets have started to discount this possibility and have begun their downward move.