UP’s new policy to give employment to 20 lakh migrants; labour reforms to create this many MSME jobs

As per the policy, workers will be provided with jobs, a guarantee of a minimum salary of Rs 15,000 and also regarding their work hours and security. 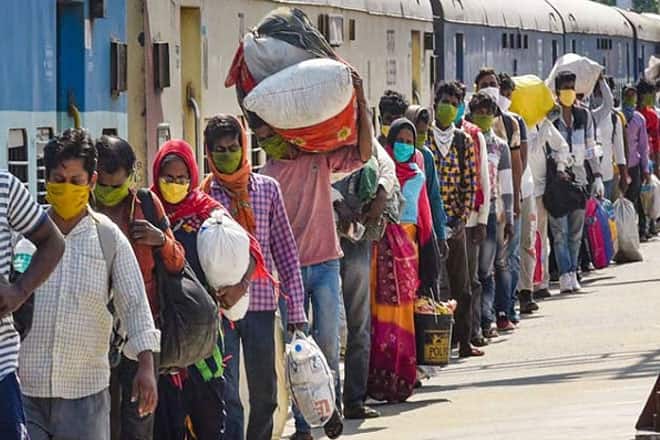 Nothing has been said about the possible fallout of outmigration on cities they have fled.

A policy to provide jobs to migrant workers, which are expected to return to Uttar Pradesh amid the lockdown, is currently underway by the state government. “A policy is being framed to provide jobs to 20 lakh migrant workers through labour reforms in their villages and towns,” The Indian Express cited the government’s statement issued after Chief Minister Yogi Adityanath’s meeting with officials. The government has asked the officials to prepare data from quarantine centres regarding skills of workers, the statement said. As per the policy, workers will be provided with jobs, a guarantee of a minimum salary of Rs 15,000 and also regarding their work hours and security, it added.

Apart from the new units, the workers will be recruited in existing businesses as well, the government said adding that women workers will also be given jobs through self-help groups. “The state government is working to make UP’s small and medium enterprises better than those in China, Bangladesh, Vietnam etc,” the statement said.

This comes days after the UP Cabinet gave a go-ahead to a draft ordinance aimed at giving temporary relief to industries from few clauses of labour laws with conditions. The state government exempted businesses from the purview of almost all the labour laws for the next three years including those related to settling industrial disputes, occupational safety, health and working conditions of workers, and those related to trade unions, contract workers, and migrant labourers. Nonetheless, Building and Other Construction Workers Act, 1996; Workmen Compensation Act, 1923; Bonded Labour System (Abolition) Act, 1976; and Section 5 of the Payment of Wages Act, 1936 (the right to receive timely wages), are still intact.

UP expects this to create new MSMEs and as a result “at least five-lakh new jobs will be created,” Principal Secretary (MSME and Export Promotion) Navneet Sehgal told The Sunday Express. He added that loans will be given to entrepreneurs for self-employment under the ‘One District One Product’ scheme and minimum four-five people are expected to be employed by each of these entrepreneurs in their new businesses.

According to the statement, “Along with the readymade garment industry, a policy for perfumes, incense sticks, agricultural products, food packaging, cow-related rural products, flower-based products, and compost and fertiliser business is being formulated by the government.” Additional Chief Secretary Awanish Kumar Awasthi said 97 trains ferrying migrant workers from multiple states had arrived in the state while 17 others were on the way.