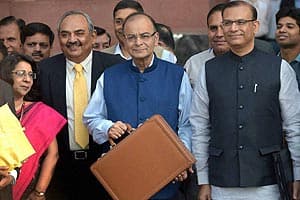 Finance Minister Arun Jaitley with MoS Jayan Sinha leaves for Parliament to present the annual budget 2015-16 from his office at North Block in New Delhi on Saturday. PTI

Contrary to what many would have thought when finance minister Arun Jaitley proposed to replace the low-yield instrument of wealth tax with an additional 2% surcharge on the taxable income of the “super-rich”, a large chunk of the R9,000 crore he estimated to collect from the extra impost will come from India Inc rather than affluent individuals.

As many as 433 BSE 500 firms with a taxable income of over R1 crore will find their tax outgo increase by R4,771 crore due to the increased surcharge. Considering that the universe of listed firms is much larger — a total of around 5,470 on the BSE and NSE alone and roughly an equal number on the regional exchanges — and there are a large number of unlisted companies making robust profits, the additional tax outflow from firms, as per an FE analysis, will be around R7,900 crore.

Compared with this, individuals with declared taxable income of more than R1 crore — believed to be around 60,000 (the last official estimate was 42,800, as revealed by then finance minister P Chidambaram in Parliament in 2013) — may have to fork out around R1,100 crore additionally due to the 2% surcharge.

Also Read
Export duties on steel likely to go; levy on iron ore may be increased
Inflation above RBI’s target for 5 months in a row, brace for more interest rate hikes, say experts
RBI may hike interest rate by 25-35bps in Aug meeting; Inflation likely to cool off on easing commodity prices
Shah hints at curbs on export of raw materials

This assumes that the average taxable income of these super-rich individuals is R3 crore.

According to official data, the number of personal income tax assessees in India is around 3.4 crore, and 80% of these report taxable income of less than R5 lakh. There are only 5.67 lakh assessees 1.6% of all taxpayers who report taxable income of R20 lakh and fall in the marginal 30% tax bracket. Those with incomes exceeding R1 crore and are liable to pay the surcharge are just 0.17% of the total taxpayer base.

This implies that even as the government’s decision to reduce corporate tax from 30% to 25% over the next four fiscals will be welcomed by companies, thousands of them will be looking at a higher tax outflow in the current financial year.

The finance minister in the Budget presented in Parliament on Saturday announced that the surcharge on companies with more than Rs 10 crore as income would go up by 2 percentage points to 12% and that on companies with incomes more than Rs 1 crore and up to Rs 10 crore from 5% to 7%. Also, the surcharge on individuals with Rs 1-crore-plus taxable incomes will increase to 12% from 10% once the Finance Bill, 2015, is approved by Parliament. The surcharge applies on the tax liability of the companies. The current average effective tax rate for companies is 23.2%. However, for the “super-rich”companies, the tax rate (inclusive of the education cess and surcharge) will now go up from 33.99% to 34.6%.

An FE sample of 433 profitable companies from the BSE 500 shows that the tax outgo of these companies could go up by Rs 4,771 crore to Rs 1.83 lakh crore after adjusting for the surcharge hike. The profit before tax for the analysis was for the 12 months ended December 2014. The tax outgo for the Sensex companies among them, based on their financials for the same period, could move up by Rs 2,387 crore to Rs 97,000 crore, the FE analysis shows.

Given this, the earnings per share for a large swath of companies could come off slightly in FY16. The EPS for the Sensex firms for FY16 has fallen by more than 4% in the last three months to Rs 1,803 and could drop by about by 0.6%, ceteris paribus.