In their pre-Budget memorandum, trade unions on Monday asked the government to double the minimum income tax exemption limit to Rs 5 lakh… 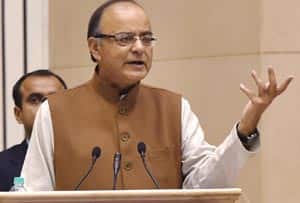 Strong economic growth in states is "imperative" for pushing up the country's GDP and giving it a "cutting edge" to fight poverty and generate jobs, Finance Minister Arun Jaitley said today. (PTI)

In their pre-Budget memorandum, trade unions on Monday asked the government to double the minimum income tax exemption limit to Rs 5 lakh, fix minimum monthly wage at Rs 18,000 and raise the basic monthly pension to Rs 3,000 for all workers.

BMS has also demanded a minimum wage of workers should be Rs 18,000/month after the 7th Pay Commission recommended it to be the lowest scale for central government employees, Kumar said.

Other suggestions of the unions include need for taking effective and timely measures to keep prices especially of food items under control, strengthening of social security schemes for the workers, extension of National Pension System to the workers of unorganised sector.

The unions have also asked that fringe benefits like housing, medical and educational facilities and running allowances in railways should be exempted from Income Tax. They also demanded that PSUs should be strengthened and expanded and the disinvestment of government shares in profit making PSUs should be stopped.

In his remark, Jaitley said one of the major priorities of the government is to make health and social security benefits accessible to unorganised sector workers.