According to analysts at Edelweiss Securities, the outlook for exports remains subdued, and the trade deficit may narrow going forward. 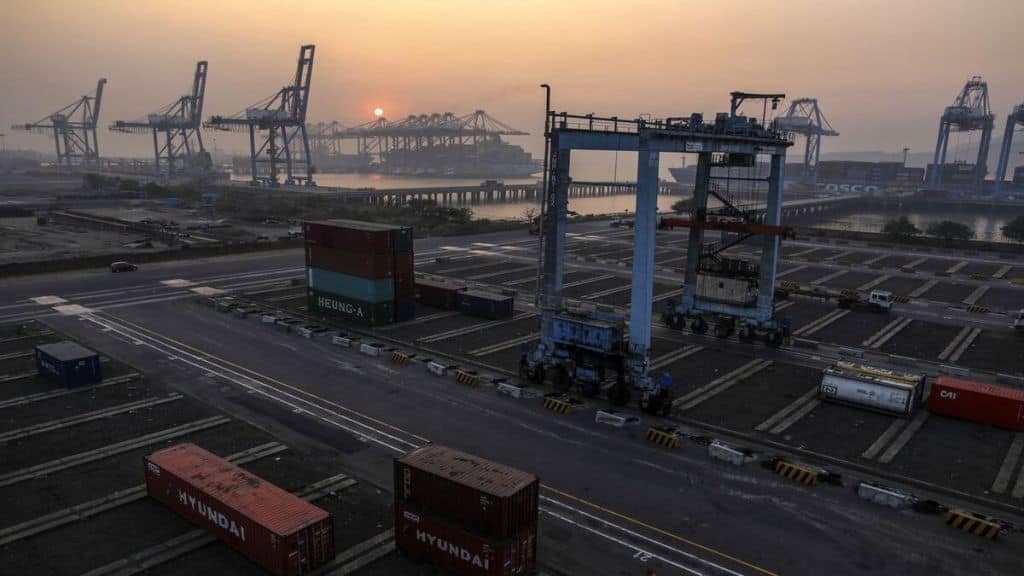 RBI’s tightening is also expected to lower import growth over the coming months which, in turn, could work to narrow the deficit gradually (Pic Bloomberg)

India’s trade deficit remains high enough for comfort despite narrowing by about $2 billion in the month of August. The trade deficit is wide due to high commodity prices and slowing exports. According to analysts at Edelweiss Securities, the outlook for exports remains subdued, and the trade deficit may narrow going forward. “Looking ahead, global growth headwinds are likely to weigh further on exports. However, the trade deficit may improve, but remain elevated, as commodity prices ease further,” they said, adding that falling US trade deficit could also weigh on Indian exports and disinflation. Additionally, RBI’s tightening is also expected to lower import growth over the coming months which, in turn, could work to narrow the deficit gradually.

The trade deficit for August fell to $28 billion, down from an all-time high of $30 billion in July. However, the trade deficit remains elevated. The improvement in the August deficit was led by the narrowing of the oil balance from -$14.8 billion to -$12 billion. An increase in the gold deficit, however, partially counters this narrowing. In August, the gold deficit rose by $1 billion to $3.3 billion. On the other hand, the core deficit (ex-oil and gold) remained as high as the last month’s deficit at around $12.7bn (widening from a recent low of $5 billion in Feb), owing to slowing core exports and elevated commodity imports such as coal and fertilisers.

According to the data, overall export growth in August remained unchanged from July at 2% on-year, but core exports (ex-oil and jewellery) contracted by 2% last month versus growth of 2% in July. By component, Agri exports showed strength (rice, meat, coffee, etc) although export duty on rice could impact rice exports going forward, said Edelweiss in its report. Engineering goods exports fell sharply by 14%. However, electronics exports remained strong. Core imports remained elevated, growing 38% year-on-year. “This is largely owing to commodities (coal, fertiliser, metals, etc) where prices are still up substantially YoY. Strong growth in machinery imports is encouraging, but it remains to be seen if this strength can sustain global industrial slowdown,” the brokerage and research firm said.

Overall, high commodity imports continued to keep overall imports elevated in August, while exports have started moderating. According to the Edelweiss analysts, the outlook for exports remains subdued. Hawkish central banks amid slowing global growth (real global money supply, global new orders, home sales, US yield curve are already in contraction) and falling US trade deficit could weigh on exports, disinflation (metals, palm oil, cotton, and to a reasonable extent crude oil). This combined with the RBI’s tightening, which should lower domestic demand, is likely to lower import growth over the coming months, they said. “This in turn could work to narrow the deficit gradually. Crude oil price and gold imports are the key variables,” analysts added.

“The continued weakness in exports amid heightened risks to global growth prospects is concerning. The narrowing of the trade deficit in August to $28 billion from a record high of $30 billion in the previous month is mainly due to a sequential fall in imports rather than the ideal scenario of higher export growth relative to imports, said Rajani Sinha, Chief Economist, CareEdge. The decline in oil imports to the lowest level in six months helped restrict a higher trade deficit during the month. The trade deficit has touched $127 billion so far in the current financial year, notably higher when compared with $54 billion in the same period last year. “Going ahead, the widening trade deficit remains concerning amid challenges on the external front and signs of weakness in exports,” Sinha added.