Indian banks have to clean up their balance sheets: RBI Guv Raghuram Rajan 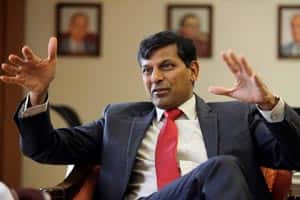 Reserve Bank of India Governor Raghuram Rajan said on Thursday the government would soon appoint heads of state-run banks given the importance of acting quickly.

Reserve Bank of India (RBI) governor Raghuram Rajan is clear the forbearance regime has ended and asserts the central bank is unlikely to give any relaxation to banks on the classification of restructured assets. Banks, the governor says, are trying to clean up their books but he believes the consensus at joint lending fora wherein they’re lending more to companies that are under stress “tends to be lenient”. Rajan tells FE’s Aparna Iyer and Shobhana Subramanian the cut in the repo rate was done because the recovery in the economy remains weak. Edited excerpts:

Starved of capital, laden with bad assets and faced with shrinking profits, are we looking at PSU bank failures?

The fact that these are government-owned banks means that the government cannot abandon responsibility, it don’t also want to be the Akshaya Patra. True, there are legacy issues for which we cannot blame the government alone.

There was a need to lend to infrastructure but there were also individual decisions, sectoral decisions made that were not fully appropriate. The government is trying to clean up on the governance. The banks have to clean up their balance sheets. We are willing to allow certain flexibilities such as the 5/25, debt restructure and such.

The government has asked banks to come up with a plan on how they will be use capital. We have also urged the government that in situations where banks cannot raise capital, it should help them.

Do you think consolidation is the way forward?

I don’t thinking putting two bad banks together makes sense. If a relatively strong bank has management and is sufficient to absorb a weak bank, it makes sense. But if the strong bank takes on a large bad asset portfolio, its focus shifts from managing a strong bank to managing toxic assets. I would say that the sequence might be to first improve the governance of all banks and then bring down bad assets. Let the bank boards figure out mergers. But some marriage brokering from the finance ministry is inevitable.

Will the RBI give forbearance to state electricity boards for a second round of restructuring?

The principle is we have to follow common practices across the board. We are at the end of forbearance. On April 1 we ended this practice of forbearance, saying if anybody has issues deal with it. Banks will need capital for more provisioning. If the problem can be solved by tweaking here and tweaking there, then we are willing to see, but provided the banks classify appropriately. Provisions are not a penalty. NPA ho gaya, now I have to pay a penalty. But NPA means an asset is losing value and therefore you have to make a provisioning.

Plant load factors at power plants are at multi-year lows, the core index has contracted as has the services PMI for May. Are you seeing recovery in the economy?

The data is mixed. We are seeing some pricing power creeping in in PMI and that seems to be an indicator that at least things are not deteriorating that much. Growth is starting to recover, the fact that coal is plentiful now, railway freight is picking up as are commercial vehicles and cars. But two-wheelers and tractors are not doing well. That is why we cut rates because we felt the recovery is not strong enough.

Why put a face to the rate cut? We said we are cutting because the economy is weak. We are using all the room we have now, room may build up going ahead and if room builds up we will be able to do more. It may not in which case we were being appropriately cautious. That is the sum substance of our statement.

Will the attractive returns on small savings schemes stall transmission process as banks are claiming?

Clearly at some point it would be a binding constraint. Interest rates on small savings schemes may not allow you to cut deposit rates. I think the rate should be made more flexible by linking them to government bond yields. However, right now banks are sitting on excess government securities on which they’re earning 7.6-7.7%. So there’s no shortage of funds to lend at this point.

Would you incentivise banks to speed up the joint lending forum process to make it more effective?

Many of the SMA2 cases get cured. Companies end up paying the interest, just within the 90 days’ deadline, to avoid turning into an NPA. Now we have a situation where companies pay just before the 60-day deadline to avoid the SMA2 tag. Some exceed that but they pay too. What we have said again and again is restructure now if you have a distressed asset. Banks brought forward their restructuring to March because the forbearance was ending in April. The deadline for the forbearance gave them an incentive to see who are the companies that are in distress.

Lets be realistic, there will be some slippages. This time the walking wounded, if we find them, will turn into NPAs. Supervision is a check we have. If we find loans are being massaged, they will essentially be unearthed and reclassified. Remember, we are trying to deal with distress without a bankruptcy code..

I am not saying JLFs work perfectly well. There are issues. Some banks do not want to go along with the consensus. Sometimes they are right because the consensus is lenient. I think JLFs are finding their way through this.

What is the criteria for giving special dispensation in certain cases of restructured loans?

Aren’t the prudential exposure limits for lending to individual companies and groups too high?

The idea is to bring these in line with international practices and we will introduce new guidelines. The new rules will also help the bond markets develop.