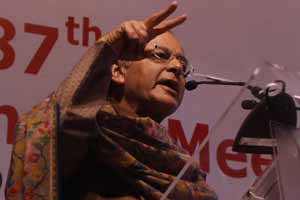 Finance Minister Arun Jaitley today said revenue department must recover the legitimate dues but there is no point in focusing on unfairly imposed taxes as they only bring “bad name”.

“…the taxes which are due must be paid and must also be recovered and even coercively recovered. But we are also a society governed by rule of law. Therefore, taxes which are not payable or taxes which are unfairly imposed eventually bring no revenue,” he said while addressing the AGM of FICCI.

Referring to the retrospective tax amendments by the UPA government, Jaitley said “I have not been able to see the real colour of money as far as those taxes are concerned because some court somewhere has stopped it or quashed it. But what has happened in the process is that it has brought us a bad name”.

The Finance Minister further said the new government, which has inherited unpaid bills, is facing a challenging task to restrict the fiscal deficit at 4.1 per cent of GDP.

“Last year’s tax refunds I have to pay, subsidies of fourth quarter last year has to be paid, the CST compensation promised from 2010 to 2013 has to be paid by me and still I have to maintain 4.1 per cent fiscal deficit target,” he said.

According to the mid-year analysis tabled in Parliament, evaluating the budget from the revenue side suggests that the fiscal deficit target was ambitious.

It said there was an over estimation of Rs 1.05 lakh crore in the budget and the amount is “broadly the shortfall that now looms ahead”.

Without naming Finish firm Nokia, Jaitely said shutting down of one telecom plant in Tamil Naidu on account of tax dispute resulted in 78 per cent drop in the production of telecommunication equipments in October.

“I have made the government intention clear that we don’t intend, we don’t subscribe to the philosophy of taxing people with a retroactive date and therefore we are not going to use this power even though it is a sovereign power vested in the legislature,” he said.

Jaitley also said government is closely watching all the court judgements and trying to “put quietus to as many of those unfair dispute” as possible.

On GST, he asked India Inc to build public opinion on the legislation that was introduced in Lok Sabha on Friday.

“I will continue to talk to all states. Convince them, persuade them and if necessary pressurise through public opinion in their own state,” he said.