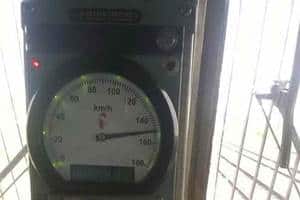 In a big boost to Indian Railways’ dreams of semi-high speed trains, Talgo’s train completed its last Delhi-Mumbai Rajdhani route trial in less than 12 hours! This is a four hours time relief from the Rajdhani which takes almost 16 hours to complete the approximately 1,388 km distance. Vijay Kumar, Executive Director, Infrastructure told FE Online, “The train left New Delhi at 14:45 hours on Saturday afternoon and reached Mumbai Central at 02:33 hours, that is in 11 hours and 48 minutes. This includes around 6 minutes of irregularities or unusual occurrences. So, the total time taken was actually 11 hours 44 minutes.” Talgo had in its simulation claimed that the total time it would take is 11 hours and 44 minutes.

The trial was conducted at a maximum permissible speed of 150 kmph and a cant deficiency of 100mm. Cant deficiency is a technical parameter that deals with the speed of the train on curves. Talgo says that the natural tilting mechanism of its coaches and the fact that they are lightweight allow them to attain higher speeds on existing Indian tracks. Talgo’s coaches have been undergoing trials since May and have gone through rigorous tests to successfully meet the targets set by Indian Railways.

Also read:  Talgo’s trains for Indian Railways: 3 litmus tests it had to clear

The Delhi-Mumbai Rajdhani route trials have been the most stringent ones, involving a long distance, various speeds and cant deficiencies. Prior to that, Indian Railways conducted speed trials of this Spanish train on the Mathura-Palwal stretch, where the train beat Gatimaan, Rajdhani and Shatabdi to clock the highest-ever speed on Indian tracks – 180 kmph. The nine-coach Talgo train is being pulled by an Indian Railways coach (diesel/electric) and consists of two Executive Class cars, four Chair Cars, a cafeteria, a power car and a tail-end coach.