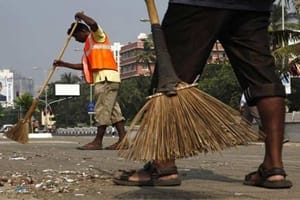 Interestingly, only 21 per cent citizens had found their city cleaner one year after the Swachh Bharat initiative was launched. (Source: IE)

As many as 52% of citizens find their city cleaner 600 days after Prime Minister Narendra Modi launched the Swachh Bharat (Clean India) initiative, a countrywide survey has found.

“At 600 days, Swachh Bharat is making progress but civic sense awareness and municipal engagement and effectiveness remain a critical challenge,” LocalCircles, which conducted the online survey of over 40,000 citizens, said.

Interestingly, only 21 per cent citizens had found their city cleaner one year after the initiative was launched.

Twenty-three percent of citizens said availability of public toilets had improved, against only 12 percent who had found an improvement a year after the drive began.

Fifty-percent felt civic sense awareness was the most important driver for improving cleanliness, while 40 percent felt municipal engagement and effectiveness was needed for better cleanliness.

Responding to the question on the availability of public toilets, a whopping 64 per cent said there had been no change, while 13 percent took the can’t say route.

The respondents also had some suggestions on how the initiative could be improved: Among them:

* Quarterly city-level events following a common structure and led by the local municipal commissioner and mayor should be organized engaging citizens, NGOs, local celebrities, corporates, and community organizations in every city

* The objective of these events should be to take up key city challenges (not individual grievances) in the area of waste management, public toilets, open defecation

* Municipalities should outline their annual plan, money available for Swachh Bharat, challenges and seek citizen inputs on how to overcome them online and via quarterly events

* As appropriate, a local advisory board, including active citizens, may be formed for Swachh Bharat in every city which may meet monthly or more often

* Any RWAs that have done good cleanliness work in last quarter must also be recognized with some civic incentives like trees planted, park renovation and the like

* A citizen rating system can also be rolled out where citizens rate their municipality and the municipality, state and central Swachh Bharat Directorate has access to all ratings at all times

* Year-wise targets could be fixed by the Mission Directorate, for municipalities and monetary awards should be given as incentive to those who fulfil the targets.
LocalCircles (localcircles.com) is a citizen engagement platform that connects citizens at local, city and national level to participate in governance and make their urban life better. It claims it has more than 1,000,000 citizens connected on it across the country.