The Indian economy is heading for a “major depression” and it can “crash” soon if efforts are not put to revive it, BJP leader Subramanian Swamy has said. 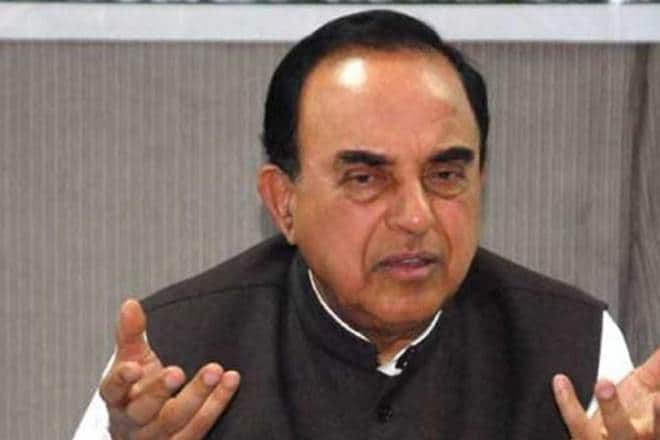 BJP leader Subramanian Swamy today said he hoped that construction of Ram temple in Ayodhya would begin next year, while advocating the removal of Article 370, which grants special autonomy to Jammu and Kashmir. (PTI)

The Indian economy is heading for a “major depression” and it can “crash” soon if efforts are not put to revive it, BJP leader Subramanian Swamy has said. The Rajya Sabha MP claimed that a year and half ago, he had written a 16-page letter to Prime Minister Narendra Modi warning him about the economy which is in a “tailspin”.

“Today, the economy is in a tailspin. Yes, it can crash. We need to do a lot of good things to revive the economy. Even a tailspin can be made to steady. If nothing is done, we are heading for a major depression. There will be mass scale… banks might collapse, factories might start closing,” he said in an interview to CNN-News18 recently.

“Last May, I wrote to the Prime Minister a 16-page letter with stats from his own departments to show that there are five storm signals,” he said.

Interestingly, former prime minister Manmohan Singh also hit out at the government once again on the GDP growth, saying hasty implementation of the GST and the withdrawal of 86 per cent of currency during the demonetisation exercise will further affect the GDP numbers.

The GDP for the first quarter (April-June) of financial year 2017-18 slumped to a three-year low at 5.7 per cent, far lower than 7.9 per cent recorded in the same quarter last year.

Subramanian Swamy suggested that to support the revival of the economy, it is important to enthuse the public with immediate change, which would be possible by abolishing the income tax. “Whatever you do, the public must see immediate change. I think first thing we should do is abolish the income tax. It’s such an easy thing to do, but they haven’t done it,” he said.

According to Subramanian Swamy, it would give a huge boost to the savings rate; and that would mean the investment cycle would start.

He also suggested the bringing down the interest rates which will get the small and medium industries moving and further start the employment cycle. Along with that he also advocated raising interest rates on fixed deposits.

“You must bring down the interest rates to 9%, and raise the fixed deposit interest rate also to 9% to encourage savings. The rate of interest is an instrument that affects the small and medium industries,” he Subramanian Swamy said.

“The big industries can borrow money abroad also. In the United States, you can borrow for 2%. While here, it being at 12%-18% is very cruel, and much of the damage from it has been to the small and medium industry, which produce bulk of the employment. The employment cycle must start, which can happen only if you get these small and medium industries moving, for which the cost of capital must come down,” he added.