The Centre is now going to entrust the responsibility of getting more number of farmers under the Pradhan Mantri Fasal Bima Yojana (PMFBY) with banks, a senior agriculture ministry has said. 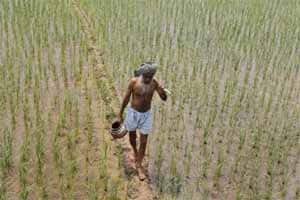 Sources told FE that Punjab, however, won’t roll out the new crop insurance scheme while Haryana is yet undecided. “The Punjab government has decided not to implement PMFBY while it is discussing implementing Weather Based Crop Insurance Scheme (WBCIS) whose premium has been brought on a par with PMFBY,” a source said.

Under the new scheme launched by the Modi government this January, the premia paid by farmers would be reduced to 2% of the insured value for the more rain-dependent kharif crop and 1.5% for the rabi season, compared with 3.5-8% under the previous schemes.

Subsidy from the government would now be “unlimited” and grow a steep 183% to `8,800 crore by FY19. The premium, including the subsidy by the government, would be around 10% of the sum assured, incentive enough for insurance firms. The subsidy would be borne by the Centre and the state government concerned equally.

In the case of Haryana, the state-level coordination committee on crop insurance meetings were held last month and it is yet to decide on rolling out the mega crop insurance scheme.

However, Maharashtra, which had received deficient rainfall during the last few years leading to destruction of crops, has recently decided to implement PMFBY.

In Gujarat, Uttar Pradesh and Chhattisgarh, the bidding process to identify insurance companies has been completed and notifications are expected shortly. The rollout of the crop insurance scheme would commence in Tamil Nadu and Assam only after the state elections.

Officials said there is no upper limit on the government’s subsidy for this scheme. “The provision of capping the premium rate, which existed in earlier schemes and resulted in low claims being paid to farmers, has been done away with,” an official said. The official added that farmers will get claims against the full sum insured, without any reduction.

For PMFBY, finance minister Arun Jaitley had allocated Rs 5,501 crore in 2016-17 while Rs 2,995 crore was allocated for various crop insurance schemes in the last fiscal.

Sources said many drought-hit states have increased fund allocation under PMFBY significantly. Maharashtra has allocated a higher amount of `1,855 crore in the 2016-17 Budget for PMFBY while only Rs 725 crore was earmarked in 2015-16. Madhya Pradesh has allocated `1,898 crore next fiscal for the crop insurance which is substantially higher from the current fiscal. Karnataka, Uttar Pradesh and Odisha have also increased allocations for the crop insurance.

Only 20 million of an estimated 140 million farmers in the country — earning for a population four-five times as many — had crop insurance cover in 2014-15, even as the facility was just against the cost of cultivation and barely provided any income protection.

According to agriculture ministry data, most of the farmers who took crop insurance were in Rajasthan, Bihar, Uttar Pradesh, Maharashtra, Karnataka and Andhra Pradesh.

‘Onus is on banks now’

The Centre is now going to entrust the responsibility of getting more number of farmers under the Pradhan Mantri Fasal Bima Yojana (PMFBY) with banks, a senior agriculture ministry has said.

“Banks will be squarely responsible. In case there is crop loss to a loanee farmer who is not insured, the bank will have to make good the losses. The onus is now on banks and insurance companies to deliver,” Ashish Kumar Bhutani, joint secretary in the agriculture ministry, said at a seminar organised by the PHD chamber of commerce and industry.

He said the government is trying to bring non-loanee farmers such as share-
croppers too within the PMFBY fold. fe Bureau