The second day of the biggest ever telecom spectrum auction ended today with total bids growing to about Rs 65,000 crore… 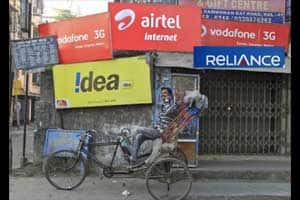 The government was expecting to raise over Rs 82,000 crore from the auction, but the final amount may go much higher if bids continue at such an aggressive pace. (Reuters)

The second day of the biggest ever telecom spectrum auction ended today with total bids growing to about Rs 65,000 crore, as the telecom operators bid aggressively across all bands including those for 2G and 3G.

The auction will continue tomorrow, despite it being a holiday on account of Holi festival.

“The bidding has taken place in all bands. At present, a value of approximately Rs 65,000 crore has been committed by bidders in respect of provisionally won spectrum. There is still spectrum, which is yet to be sold. Bidding would recommence tomorrow,” the Department of Telecom (DoT) said.

The government was expecting to raise over Rs 82,000 crore from the auction, but the final amount may go much higher if bids continue at such an aggressive pace.

Incumbents Bharti Airtel and Vodafone are locked with Reliance Jio Infocomm to protect their spectrum they need to carry voice and data in the world’s second-biggest smartphone market. In all, eight bidders are in fray.

On the second day today, operators continued aggressive bidding in 900 MHz band with price increment in seven circles whereas there was not much bidding in Mumbai, Delhi, Kolkata and Andhra Pradesh circles in the 2,100 MHz band.

Good bidding was also witnessed in 800 MHz and 1800 MHz bands. The government will not release results of the auction because of a court ruling.

Asian brokerage firm CLSA in a report said that in a surprise, large data markets of Delhi, Mumbai, Karnataka and Andhra Pradesh saw no price increase in 2100MHz band, despite only one block of available spectrum.

Most of the spectrum put up for auction is presently held by Bharti Airtel, Vodafone, Idea Cellular and Reliance Telecom. Their licences are expiring in 2015-16.

Mobile licences for nine circles of Idea Cellular, six circles of Airtel and seven circles each of Vodafone and Reliance Telecom are coming up for renewal.

It is mandatory for these companies to bid for spectrum if they have to continue offering mobile and other telecom services as their permit is expiring.

The government had raked in Rs 62,162 crore from the last spectrum auction held in February 2014.