Soon, odd-even will be in place throughout the year: Transport Minister Gopal Rai

Transport Minister Gopal Rai tells The Indian Express that odd-even is no longer an emergency measure for the Delhi government. 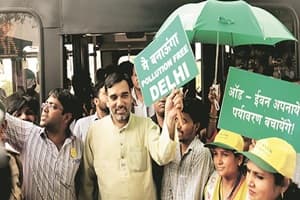 We are considering covering two-wheelers under the rule. We are also thinking of introducing odd-even throughout the year, says Gopal Rai.

Transport Minister Gopal Rai tells The Indian Express that odd-even is no longer an emergency measure for the Delhi government, but one among many long-term measures taken to holistically combat pollution in the capital.

Do you plan to make the odd-even rule a permanent feature in Delhi?

We are seriously thinking of enforcing the rule for 15 days every month. After this season of odd-even, we will review the efficacy of the rule and ask people for their opinion. Based on the survey, we will take a decision.

Will two-wheelers continue to be exempted next time?

We are considering covering two-wheelers under the rule. We are also thinking of introducing odd-even throughout the year. But this will happen a year-and-a-half later. We need time to strengthen our public transport system. We are planning to add 3,000 buses to our existing fleet, WiFi, CCTV cameras, e-ticketing systems and a common mobility card connecting buses and the Metro.

This has to be made feasible. There is no way out. The scheme was a success the last time because we were practical in our approach. We know our public transport system is too weak to ensure a smooth shift for commuters from travel by private cars to public travel, unlike other metros across the world. Once our transport system is robust enough, the rule will be enforced accordingly.

Opposition to the scheme seems to be growing and are people tiring of it?

People are not tiring. They are the ones who asked for this and they are healthier and happier during odd-even. They reach their destinations faster and feel less tired. The opposition has mainly been from the BJP, be it the call for an autostrike or (BJP MP) Vijay Goel’s public flouting of the rule. This is politics, not public opinion.

Did you not bring in odd-even as an emergency measure? Is there no other way to combat pollution?

No. It is one of the long-term measures to curb vehicular pollution. The other measures are planting trees, increasing grass cover, vacuum cleaning of streets to clear dust. The government is following a two-pronged strategy to holistically combat pollution — by reducing pollution sources and setting systems in place to absorb and reduce pollutants already present. Vehicles belong to the first category.

Once the peripheral expressways are built by the Centre, we will keep trucks and heavy vehicles from entering the capital.