Smart Cities Mission projects get off the ground in 2016; Rs 1,32,197 cr proposals approved

Also, about half of the 60 cities have formed the special purpose vehicles (SPVs) mandated by the central government. (Each city has to set up a SPV, headed by a CEO, through which the city development plan will be executed). 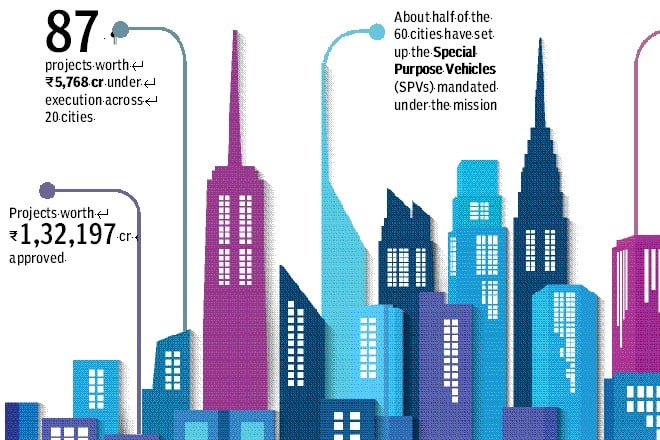 Compared to the last two years, the Smart Cities Mission did not get a big mention in the Finance Minister’s Budget speech earlier this month. However, Arun Jaitley did set aside R9,000 crore for the Atal Mission for Rejuvenation and Urban Transformation (AMRUT) and Smart Cities Mission, as against R7,296 crore in the last Budget. As for the mission’s movement on the ground, projects worth R1,32,197 crore were approved between January and December 2016 in the 60 cities that have been selected so far. Of these, 87 projects worth R5,768 crore are under execution in 20 cities (with eight projects already completed) and 80 more projects with an investment of R4,500 crore are close to being awarded.

Also, about half of the 60 cities have formed the special purpose vehicles (SPVs) mandated by the central government. (Each city has to set up a SPV, headed by a CEO, through which the city development plan will be executed). Pratap Padode, Director, Smart Cities Council of India, says that although the minister didn’t mention the Smart Cities Mission, he made clear the government’s focus on infrastructure. “All infra projects collectively contribute to making cities better, in any case,” he reasons.  “The first lot of operational projects under the mission have been in areas such as street lighting, smart security and surveillance. Mumbai now has 2,500 CCTV cameras, bringing down the crime rate, as per reports. Nagpur recently awarded L&T a contract for city surveillance that will install 3,800 IP-based cameras,” he says. Besides, waste-to-energy projects and smart road tenders are coming up in various states.

“Cities chosen to be developed as smart cities, have a comparative advantage of being better placed on civic amenities; their citizens have higher disposable incomes and there are opportunities for trade, commerce and industrialisation,” says Deepak Premnarayen, President, Indian Merchants Chamber. Padode concurs: “Ultimately, the city which is going to be smart will attract a different kind of talent with respect to the people who want to move there. A city like Mumbai or New Delhi—these cities can’t wholly become smart overnight. It will take decades.” Indeed, individual cities have drawn up investment plans ranging from R1,300 crore to R6,000 crore, depending on the existing infrastructure (water and sanitation pipelines, housing, public amenities, roads, etc.) and the need for its upgrade.

To receive their share of the funds allocated by the central government, urban local bodies (ULBs) need to raise an equivalent amount of money to finance their city development plans. This has led to an increasing number of ULBs looking to improve their accounting practices. Bhalchandra Murarka, President, Choice Consultancy Services, says, this has generated a lot of work for chartered accountants like him. “In many cases, ULBs do not even practise double-entry accounting. This will hamper them if they need to get themselves rated. We are now working with many ULBs across the country,” he says.

Jayanta Roy, senior VP, ICRA, says that while it is true that a majority of ULBs suffer from lack of proper auditing standards, “some Indian cities enjoy sound credit profiles and they should be in a position to raise bonds from the markets.” In all, there are less than a handful of double-A rated municipalities at present. The mandate is for 85 cities to get themselves rated by March this year. With the central government putting the onus squarely on the ULBs, there is bound to be better accountability in the future, says Roy.