The instruction to DRI comes on the heels of US-based think-tank Global Finance Integrity stating in a report that India had fourth largest outflow of black money in the world with a whopping $51 billion being siphoned out every year between 2004 and 2013. 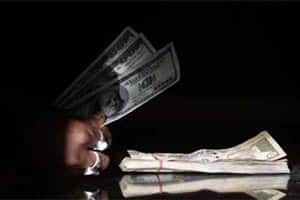 Black money amounting to Rs 65,250 crore was declared through the one-time declaration window as part of 64,275 declarations and the figures were announced by Finance Minister Arun Jaitley in a press conference on October 1. (Reuters)

The Supreme Court appointed Special Investigation Team on black money has asked the Directorate of Revenue Intelligence (DRI) to verify whether $505 billion had flown out of the country during 2004-13, when Congress-led UPA was in power.

The instruction to DRI comes on the heels of US-based think-tank Global Finance Integrity stating in a report that India had fourth largest outflow of black money in the world with a whopping $51 billion being siphoned out every year between 2004 and 2013.

“The SIT obtained detailed calculations of country wise illicit financial flows for each of these years from Global Financial Integrity,” a finance ministry statement said.

The details, it said, have been sent to DRI on February 8, which has been asked to “verify the extent to which the calculations are correct”.

The SIT was of the opinion that since reports like those of Global Financial Integrity were widely used in academic circles and for debates, it is “very crucial to ascertain the veracity of such reports”.

Further necessary action shall be taken by SIT after receipt of report from DRI, it added.

“The Global Financial Integrity, in its report, ‘Illicit Financial Flows from Developing Countries 2004â€“2013’ has estimated that illicit financial flows out of India for the period 2004â€“2013 to be the tune of USD 505 billion,” it said.

The statement said that SIT in its various reports has highlighted the menace of trade based money laundering, a major source of illicit money flow out of the country.

In its second report, SIT had recommended that there should be institutional mechanism through a dedicated set up which examines mismatch between export-import data with corresponding data of other countries on a regular basis.

The SIT has also recommended that wherever possible, especially in case of commodities, a system for cross checking of prices of imports-exports with international prices may be done.

“Various reports including those by Global Financial Integrity have emphasised that Trade Based Money Laundering is the main medium or process through which funds are illegally taken out of countries,” it added.