The India Meteorological Department (IMD) for the first time issued a ‘code red’ warning for heat waves which means unless it is a life and death situation during peak sun hours people should remain in the shade, says B P Yadav, its Chief Forecaster. 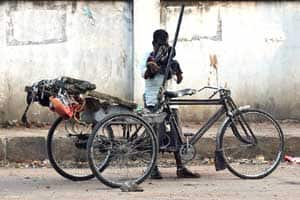 An Indian rickshaw puller wipes sweat off his face on a hot summer day in Hyderabad, in the southern Indian state of Telangana, Saturday. (AP)

India is baking! The heat is on as most parts of India are reeling under a severe heat wave with temperatures hovering at over 45 degrees Celsius, and more than a thousand people have died because of the continuing heat wave, which is unprecedented in its spread all across the country.

So should we pray to the sun god to give us respite? Possibly not since the onset of the monsoon is almost totally dependent on the Indian landmass heating up adequately. On the other hand managing heat exposure to the human body is possible and many of the victims of heat stroke could have survived had they followed simple precautions.

The science of heating, the body’s heat controlling mechanisms and the fuming sun and its linkage to the monsoon are all part of a complex inter woven natural web.

The sun and the rain are intricately linked since the blazing sun actually aids the onset of monsoon. It may be a co-incidence but 2015 falls at the peak of the solar activity when the sun is at its angriest in the usual 11-year solar cycle.

According to the Centre for Science and Environment, New Delhi, a green pressure group, eight out of the 10 warmest years in India were during the recent past decade (2001-2010), making it the warmest decade on record. An urban heat island effect where cities heat up more due to the excessive cement concrete is also exacerbating the situation for citizens.

The human body is a magical living machine, which has adapted to work optimally when the core body temperature is 37 degrees Celsius or 98.6 degrees Fahrenheit. Perfected through millions of years of evolution, it is the right temperature at which the enzymes that control the working of the body perform at their peak. The body’s tolerance level to heat is unfortunately very slim it just simply finds it difficult to handle even a one degree Celsius rise in its core temperature.

Human beings are all-weather animals and for that being warm blooded is an essential requirement. However, to keep warm blooded a huge price has to be paid. The human machine consumes lots of energy just to keep warm. At the same time, human beings just cannot tolerate extreme temperatures without external aid as a consequence heat waves take a heavy toll.

When the ambient temperature goes to say about 45 degrees Celsius, like being witnessed in southern India, then the reverse starts happening and the body starts accumulating heat.

Nevertheless, nature has built in an effective cooling mechanism through sweat glands that line the human skin.

When the body starts heating up, the body starts to sweat. As the water evaporates the body cools down, a principle of basic physics similar in nature to what keeps water cool in earthen pitchers.

The internal heat controlling mechanism of the body is largely controlled by a pea-sized body called the hypothalamus located within the brain. It is the thermostat of the body; it not only gets feedback from the nerve endings on the skin but also has its own heat sensors that manage the heat in the body.

If the body senses extreme cold the hypothalamus sends a signal to start shivering essentially the muscles start twitching in the process generating heat. If it senses heating the blood vessels near the skin are signalled to dilate so that more blood can reach the surface, which combined with perspiration would lead to heat loss. A natural automatic air-conditioner for Homo sapiens.

One of the first signs of heat related over-exposure is a headache that comes on, if it remains unattended a feeling of unease sets in; followed by giddiness and nausea. If still not attended to, cramps could also develop, further heat exhaustion leads to a state of fainting and unconsciousness can develop.

If core temperature of the body touches 40 degrees Celsius and one continues to work under extreme heat conditions without respite, a heat stroke sets in and it is usually a fatal condition. Once a heat stroke kicks in the body stops to perspire and only emergency medical treatment like providing fluids through an intra-venous drip is a solution.

Simple precautions like avoiding exposure to peak heat between 11 AM and 4 PM is the simplest way to avoid heat strokes, a siesta after all is not such a bad idea, small towns in India still literally shuts down during mid-day. The competitive environment in big cities have made establishments remain open all day.

Drinking copious amounts of liquids like 1-2 glasses of water every hour can easily help avoid getting a heat stroke explains Dr Abhishekh Bharadwaj, a scientist who works at the Heat Physiology Division of the Defence Institute of Physiology & Allied Sciences (DIPAS), New Delhi. The institute develops training and acclimatisation modules for Indian soldiers working in the Thar desert, it has also developed a ‘replenishment drink’, a small sachet called ‘Dipsip’ a combination of 14 nutrients that can help soldiers keep fighting fit even in extreme heat conditions.

Bharadwaj says an average person should drink between 4-6 litres of water everyday and those working in outdoors need to consume about 8-10 litres along with some electrolytes to avoid heat stress to the body. Wearing light coloured loose clothing also helps, so a saree is cool and tight jeans a no-no in summer. There is also scientific merit in why Rajasthani men wear large turbans, the many folds of the cloth help keep the head insulated from direct heat of the sun.

The India Meteorological Department (IMD) for the first time issued a ‘code red’ warning for heat waves which means unless it is a life and death situation during peak sun hours people should remain in the shade, says B P Yadav, its Chief Forecaster.

On the sub-continent, the monsoon plays a critical role as it provides almost 80 per cent of the total rainfall for the country, life in India could be hellish if the rains did not arrive. During the summer months the landmass heats up making the air thinner, heavier moist cold air from the Indian Ocean then rushes in to replace the rising warm air, setting in a wind pattern that we understand as the south-west monsoon.

Laxman Singh Rathore, director general of the IMD explains that an angry sun or a hot summer is essential for sustaining life in India. In fact, even the logo of IMD in Sanskrit reads ‘Adityat Jayate Vrishti’, meaning that rains come from the sun and that good rainfall in the rainy season was the key to bountiful agriculture and food for the people. Simple precautions can easily help overcome heat strokes.