This whole bit about maximising licence fee and expecting lowest tariff is not sustainable and we need to come to grips with it, said Rahul Khullar. 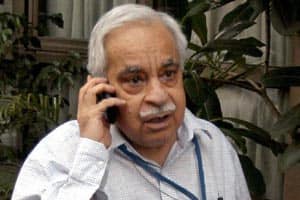 A re-look at pricing of spectrum and how to fund the expansion of broadband are the two critical pieces of public policy that the government needs to address urgently, Telecom Regulatory Authority of India chairman Rahul Khullar said on Monday. Rationalisation of the licence fee and other such charges and making the regulatory body directly accountable to the Parliament were some of his other suggestions.

In an interview with FE two days before he demits office after completing his three-year tenure that saw three auctions for spectrum being conducted by the government, Khullar said that the time has come when the government needs to look “beyond auctions”. “The government needs to find some solution to the pricing of spectrum. The entire gamut of how spectrum is released, audited, taken away from ones squatting on it and its pricing need urgent attention. We need some different way of dealing with new spectrum and old, licensed spectrum. This whole bit about maximising licence fee and expecting lowest tariff is not sustainable and we need to come to grips with it,” Khullar said.

According to him, unless alternative methods of pricing spectrum are not explored, all policy goals of the government such as ‘Digital India’ and broadband connectivity would collapse.

Specific to broadband penetration, where the government is working on a national optic fibre network and the Digital India project, the Trai chairman said these require huge investments, upwards of Rs 30,000 crore, and to drive it entirely through the public sector won’t work. “All over the world, broadband is delivered by the private sector and in developing countries it is done through the public-private partnership model,” he said.

The over Rs 21,000-crore National Optic Fibre Network project, which aims at linking the country’s 2.5 lakh villages by high-speed broadband services, and which is being implemented by the state-owned BSNL, is running behind schedule. Recently a government-appointed committee had also suggested that the private sector be roped in to implement it.

Stating that “we cannot carry on auctioning spectrum”, Khullar said that “other methods of allocating it like the Scandinavian model where spectrum is allocated at a nominal price but with onerous roll-out obligations” should be explored. For instance, even today some 50,000 villages are unconnected. The government can look at allocating spectrum at low price to the operators on the condition that these villages are connected.

The Supreme Court’s response to the Presidential reference made by the government before it in 2012 stated that auctions are not the only way to allocate natural resources. “The government can opt for other methods so far as they are fair and transparent and stands the test of scrutiny,” Khullar said.

The outgoing Trai chairman also said that the government needs to rationalise the licence fee and spectrum usage charge so that rules are simplified. For instance, during the UPA regime, the regulator had suggested that spectrum usage charge, which used to range between 2% and 6%, be uniformly brought down to 3%. However, the government did not accept Trai’s recommendation and kept it at 1% for broadband access service providers and 5% for mobile operators.

Similarly, at present a recommendation of the regulator is pending before the department of telecommunications which has made a case for reducing the revenue share licence fee to 6% from the current 8% of the adjusted gross revenue of the operators. It has also suggested that contribution to the universal service obligation fund be reduced from the current 5% to 3%, arguing that currently, of the 8% licence fee 5% goes to USOF and 3% to the government. If the licence fee is reduced to 6% and USOF to 3%, the government’s revenue would be protected.

On the larger issue of making Trai accountable for its actions, Khullar said that regulatory bodies that are the product of subordinate legislation should be directly responsible to Parliament. “The accountability of bodies such as Trai can be enforced by establishing an appropriate instrument in Parliament,” he said.