Cheaper food items helped retail inflation drop to a fresh low of 4.38 per cent in November… 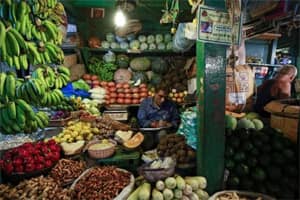 Cheaper food items helped retail inflation drop to a fresh low of 4.38 per cent in November — the fifth consecutive month of decline — a development that can strengthen the case for interest rate cut by the RBI.

This is the lowest level of Consumer Price Index (CPI) based inflation since the government started computing the new series of data in January 2012. It stood at 5.52 per cent in October 2014, while same was over double the current level at 11.16 per cent in November 2013.

The food inflation also came down to 3.14 per cent in November as against 5.59 per cent in the previous month.

Retail prices of vegetables declined by 10.9 per cent as against a decline of 1.45 per cent in October, according to the data released by the Ministry of Statistics and Programme Implementation today.

However, the rate of inflation in protein-rich items like eggs, fish and meat was at 6.48 per cent in November, slightly higher from 6.34 per cent in the previous month.

The Reserve Bank in the recent past has focussed on retail inflation while deciding its monetary policy, but there have been no rate cut for many months.

In its monetary policy review earlier this month, the Reserve Bank kept its key repo rate unchanged at 8 per cent and cash reserve ratio (CRR) at 4 per cent.

“…if the current inflation momentum and changes in inflationary expectations continue, and fiscal developments are encouraging, a change in the monetary policy stance is likely early next year, including outside the policy review cycle,” RBI Governor Raghuram Rajan had said.

COMMENTARY
R. SIVAKUMAR, HEAD OF FIXED INCOME, AXIS ASSET MANAGEMENT, MUMBAI
“A significant part of this (easing inflation) is on account of the base effect, and we should see that reverse and expect inflation within the next three months to go back to about the 5.5 percent range.
“We don’t see any immediate change in the RBI’s stance based on what I see today.”

BILL ADAMS, SENIOR INTERNATIONAL ECONOMIST, PNC FINANCIAL SERVICES GROUP
“Paralleling global developments, a decline in oil prices and downward pressure on commodity prices generally is cooling Indian inflation, as are the more favourable base comparisons between late 2014 and the highly inflationary period of late 2013.
“Although Indian industrial production weakened in October, the trend for the economy continues to be stronger; 2014 is on track to be the best year for Indian electricity output growth since 1989.
“Looking to 2015, India should be a big winner from the global decline in energy prices, which will support consumer spending power, dampen inflation, and provide the Reserve Bank of India with room to loosen monetary policy.
“Indian real GDP growth should accelerate above 6.0 percent in 2015.”

ANUBHUTI SAHAY, ECONOMIST, STANDARD CHARTERED BANK, MUMBAI
“The IIP (industrial output) print was much worse than expected, and we last saw such bad prints back in October 2011.
“Some of the negative impact is likely to fade from next month onwards. However muted activity in the industrial sector is unlikely to provide a big push. We expect a rate cut in February 2015.”

“It does put more pressure on the RBI to cut rates but I think given guidance RBI has provided, it would be prudent for it to wait at least until February and at least until the budget to take a decision.”