Going by the GDP numbers, the economy grew at a reasonably good 7.3% year-on-year in the three months to December. 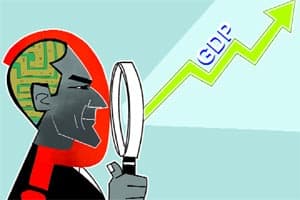 Dull volumes at FMCG companies make it evident there’s isn’t too much purchasing power with consumers, especially in rural India.

Going by the GDP numbers, the economy grew at a reasonably good 7.3% year-on-year in the three months to December. However, India’s corporate sector, banks included, has turned in a very dull performance: Net profits for a sample of nearly 3,000 companies have fallen nearly 10% y-o-y.

That’s because revenues are down 3.3% y-o-y — partly the impact of falling commodity prices and partly

the inability of companies to drive volumes in a sluggish economy. Operating profits rose 6.4% thanks to lower input costs, which fell 423 basis points.

If one looks at the sum of operating profit and employee costs — an approximate proxy for value addition — the rise is 7.4% in Q3FY16. However, while the GDP and GVA have grown at around 7%, the trend in the proxy is rather uneven — in Q2FY16, it was virtually flat at 0.75% and in Q1FY16 it was 14.5% thanks to a jump in employee costs.

However, one must take into account the fact that oil marketing companies have done exceptionally well this time around because of the fall in crude oil prices. Five refining companies reported net earnings of R5,920 crore in Q3FY16 compared with a total loss of R4,986 crore in Q3FY15.

Also, banks have reported a rise in pre-provisioning profits of 5% y-o-y; that, however, is somewhat misleading because collectively 25 state-owned lenders have reported a loss of R8,723 crore.

Unless companies report strong bottom lines, there will be no surplus to invest. By that reasoning, the Q3 numbers do not inspire confidence the economy is as robust as the GDP and GVA numbers would have us believe.

Dull volumes at FMCG companies make it evident there’s isn’t too much purchasing power with consumers, especially in rural India.

Despite a healthy order inflow, BHEL reported a net loss of R1,102 crore in the latest quarter due to poor execution, lower sales realisations, pricing pressure and rising raw material costs. Moreover, while the current order book will see the company through another year, analysts say it is difficult to “reasonably foresee the potential ordering pipeline since private capex remains muted, NTPC and states’ major ordering is largely done, and UMPP ordering remains in a state of flux”.

With very few companies announcing capex plans, it’s hard to see GFCF (gross fixed capital formation) at constant prices growing at 5.3% in FY16 as the CSO has forecast. Depreciation in the three months to December rose just 3.1% y-o-y, a shade worse than the 5.8% y-o-y in Q2FY16 and 3.5% y-o-y in Q1FY16.