RBI Governor Raghuram Rajan has called for a cut in real estate prices in a bid to encourage homebuyers to enter the market and buy properties. 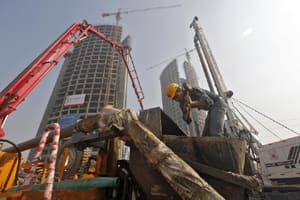 The call from the RBI Governor comes at a time when the industry remains saddled with high unsold inventories and many within the industry terming 2015 as one of the worst years for the sector in a decade in terms of sales and new launches. (Reuters)

With residential housing sales not witnessing a pick-up despite a 150-basis point cut in rates by the Reserve Bank of India over the last 16 months, RBI Governor Raghuram Rajan has called for a cut in real estate prices in a bid to encourage homebuyers to enter the market and buy properties.

The call from the RBI Governor comes at a time when the industry remains saddled with high unsold inventories and many within the industry terming 2015 as one of the worst years for the sector in a decade in terms of sales and new launches.

“I am hopeful that as interest rates come down, there will be more credit and buying. And I am also hopeful that prices adjust in a way that encourage people to buy,” Rajan said earlier this week in Mumbai. He added, “there is a little bit of everything that needs to happen” for the revival in the real estate sector.

The realty industry has been quick to react to the governor’s call and has responded by saying that the market has already witnessed price correction over the last three years as they have declined by around 30 per cent.

“There has been consistent correction in property prices in the past 3 years by nearly 35 to 40 per cent across the industry. In fact nearly 90 per cent of the home supply in the country has already shown price correction. Given the ever increasing cost of land and cost of construction any further fall in prices will only lead to non performing assets (NPAs) and non delivery of projects,” said Amit Modi, director, ABA Corp and vice president of Credai, western UP. But the residential price data for last three years accessed from Knight Frank reveals that the average price across the major markets have either gone up or have remained stable. Data on Housing Price Index (HPI) released by the Reserve Bank of India on Thursday showed that housing prices across the country rose during the quarter ended December 2015.

While the highest price increase was witnessed in Lucknow, Jaipur saw a mild correction in prices during the quarter against the corresponding quarter last year. The HPI-All India rose to 221.7 in third quarter of FY16 from 218.2 in the previous three-month period. However, as homebuyers stayed away from the market, there has been a moderation in the pace of price increase. “The annual increase of HPI-All India moderated since Q1, FY16. During Q3, FY16, the rate of increase fell below 10 per cent,” RBI said. The RBI released the data for the entire country and 10 major cities — Mumbai, Delhi, Chennai, Kolkata, Bengaluru, Lucknow, Ahmedabad, Jaipur, Kanpur and Kochi for the October-December quarter of 2015-16. Another set of real estate price data accessed from Knight Frank for eight major cities — Mumbai, Delhi-NCR, Bengaluru, Pune, Chennai, Hyderabad, Kolkata and Ahmedabad — shows that all the eight cities have seen the average residential price going up by 3 to 15 per cent between 2013 and 2015. While average prices in Bengaluru went up 15 per cent from Rs 4,158 per sq ft (psf) in 2013 to Rs 4,780 psf in 2015, average prices in Mumbai rose by 12.8 per cent in the same period from Rs 7,085 psf to Rs 7,994 psf. While the Delhi NCR market witnessed a price increase of 7.4 per cent, Kolkata and Chennai remained the most stable as prices went up by 3.1 per cent and 5.6 per cent, respectively.

Also, according to a report released by online real estate firm PropTiger earlier this month, both the sales and new project launches for the top 9 cities for the year ended March 2016 slid to a three-year low. While factors such as lower-than-expected economic growth, slowdown in job creation played a role in decline in demand, factors such as prevailing high real estate prices, high interest rates and delay in delivery of projects by the developers have also played a big part in keeping prospective homebuyers on the sidelines over the last few years. Pointing at the need for adjustment so that more people want to go and buy houses, Rajan said that apart from interest rates, measures such as including affordable housing loans under the priority sector lending requirements will encourage homebuyers. He also called for greater transparency. “We need action on real side (as) also on transparency on land acquisition, on transparency on construction and on sales,” he added.

On the other hand, while developers have been claiming to have reduced the prices, they also say that there is a limitation to the price cuts that they can bring in as there is a fixed cost that they work on and if they reduce the prices further they would be operating in losses. Anuj Goel, executive director of KDP Developers said: “Service tax, VAT, registry cost and various other government levies only add to the fixed cost and hence leads to an overall increase in the basic cost of a project.

If any further reduction is done on our end the project would only act as a NPA for us.” Concerns have also been raised on banks not fully passing on the benefit of repo rate cut (rate at which RBI lends to commercial banks) by the RBI and thus there is an issue of transmission of the same. While RBI has reduced the repo rate by 150 basis points, the banks have brought the lending rates down by up to 80 basis points. “We sincerely hope that both finance ministry and the RBI push all the banks to transfer the entire benefit to the end consumer for whose benefit it is meant, else these moves will severely stop short of benefiting the consumer and only help in buffering the bottom lines of the banks,” said Modi.

The average price of residential units not coming down despite weak sales and rising inventory only shows that developers are also in a wait-and-watch mode and are looking to hold on to the prices in the hopes of a market revival.

While they are not bringing the prices down they are also looking to sweeten the deal with some offers and by offering to pay the EMI till the time of possession. An industry insider said that some developers are open to negotiation on the price with customers: “The developers are negotiating on price with serious buyers but are not announcing a cut in prices as they think that it will send a wrong signal in the market. Also they are looking to hold on to units and waiting for markets to improve instead of going for a cut in prices and reducing their overall realisation from the project.” He, however, added that the prices had moved significantly higher and they need to come down to attract the homebuyers.