Replacing rice and wheat with ‘less thirsty’ crops could dramatically reduce water demand in India, while also improving nutrition, a study has found. 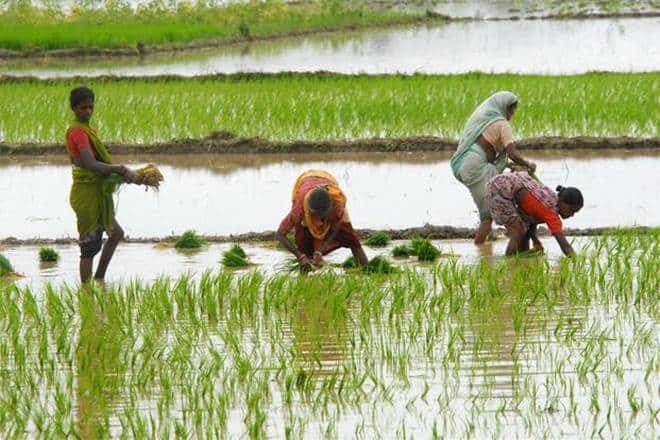 According to the study published in the journal Science Advances, India will need to feed approximately 394 million more people by 2050. (Photo: PTI)

Replacing rice and wheat with ‘less thirsty’ crops could dramatically reduce water demand in India, while also improving nutrition, a study has found. According to the study published in the journal Science Advances, India will need to feed approximately 394 million more people by 2050, and that is going to be a significant challenge. Nutrient deficiencies are already widespread in India today – 30 per cent or more are anaemic – and many regions are chronically water-stressed, researchers from Columbia University in the US said. Starting in the 1960s, a boom in rice and wheat production helped reduce hunger throughout India.

This Green Revolution also took a toll on the environment, increasing demands on the water supply, greenhouse gas emissions, and pollution from fertilisers, researchers said. “If we continue to go the route of rice and wheat, with unsustainable resource use and increasing climate variability, it is unclear how long we could keep that practice up,” said Kyle Davis from Columbia University. “That is why we are thinking of ways to better align food security and environmental goals,” said Davis, lead author on the study. The researchers studied six major grains currently grown in India: rice, wheat, maize, sorghum, and pearl and finger millet.

For each crop, they compared yield, water use, and nutritional values such as calories, protein, iron, and zinc. They found that rice is the least water-efficient cereal when it comes to producing nutrients, and that wheat has been the main driver in increasing irrigation stresses. The potential benefits of replacing rice with alternative crops varied widely between different regions, depending on how much the crops could rely on rainfall instead of irrigation.

However, the researchers found that replacing rice with maize, finger millet, pearl millet, or sorghum could reduce irrigation water demand by 33 per cent, while improving production of iron by 27 per cent and zinc by 13 per cent. In some instances, those improvements came with a slight reduction in the number of calories produced, because rice has been bred to have higher yields per unit of land. In some regions there is a tradeoff between water and land use efficiency, but Davis thinks that with more attention from scientists, the alternative crops could develop higher yields as well. For now, rice replacement is not a one-size-fits-all solution, but something that should be evaluated on a case-by-case basis for each district, Davis said.

The team, including Ashwini Chhatre from the Indian School of Business, wants to study Indian food preferences, to see if people would be willing to incorporate more of these alternative cereals into their diets. “There are places around India where these crops continue to be consumed in pretty large amounts and there were, even more, a generation or two ago, so it is still within the cultural memory,” Davis said.