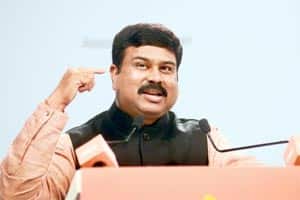 On the day a Mukesh Amabnai-led reliance Industries employee was arrested for being the recipient of leaked confidential government documents of Petroleum Ministry Petroleum Minister Dharmendra Pradhan said strong action would be taken against the two employees of his ministry who were arrested by police. Also Read (Reliance industries man arrested)

“They will be severely dealt with. Police is probing the case. We will take strong action against the guilty. Government will come down hard on them,” he said when asked about the case.

Investigating agency is doing its job, independent inquiry is going on, let it be complete: Dharmendra Pradhan pic.twitter.com/RKKPiZyMA7

Two Petroleum Ministry employees were among five persons arrested for allegedly leaking confidential government documents to private companies, Delhi Police said today. Also read: (Reliance industries reacts) Sources said a clerical staff and a peon of the Petroleum Ministry were apprehended by police. They said provisions of Official Secrets Act may be slapped on them.

5 people in total have been arrested, we will question them: BS Bassi on leaking of docs from Petro Ministry pic.twitter.com/gsryP9j4Bg

Unfortunate but its happening, companies use ppl to do all this. Govt is free to have its investigation: Sanjay Nirupam, Cong on leaked docs

Asked whether any corporate lobbyist could be involved, the Petroleum Minister said it was up to the police to investigate. “The government was conscious. Agencies are investigating. They will come out with full facts,” he said.

Terming leaking of information as a serious issue, the Minister said CCTV cameras were installed inside the Ministry as part of security measures.

“Government will come down hard on those involved,” he said.