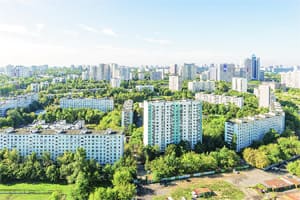 The government has realised that an “easy entry-easy exit” option is needed to attract foreign investors into the construction and real estate sector in order to give a leg up to the ambitious vision of developing 100 smart cities and make the housing for all agenda a reality. Towards this end, while the the overall foreign direct investment (FDI) policy for the sector was liberalised last month, in the coming weeks, the government is considering doing away with the condition of three-year lock-in period for exiting a project. This, a government official said, will help attract foreign investors who consider easy exit a pre-requisite before making an investment decision.

“The issue has been debated and a conclusion has been reached that the lock-in period is inconsequential. As such if the trunk infrastructure is being developed, the issue of lock-in does not arise because developing such infrastructure takes 2-3 years. However by keeping this condition, investors become apprehensive and wary of investing,” the official said.

According to the amendments carried out last month, investors are permitted to exit on completion of the project or after three years from the date of final investment, subject to development of trunk infrastructure, which includes roads, water supply, street lighting, drainage and sewerage.

“The clause of exiting after three years of final investment was the only clause which required further debate. It is very regressive. If it is being done away with, it is a step in right direction,” Rajeev Bairathi, executive director, capital transaction group at Knight Frank India, told The Indian Express. On the other changes in the FDI policy, he said the industry been unanimous in its appreciation that the measures are in the right direction.

The department of industrial policy and promotion (DIPP) is working on the rules pertaining to the FDI policy and will soon come out with a notification. The government is of the view that the initiative will be a big driver of growth of smart cities, affordable housing and industrial townships and the private sector should step up its efforts to take its full advantage.

Rating agency Fitch had earlier pointed out that while the move will improve the liquidity situation of developers and boost supply, it could also result in increased price competition among developers. Also, factors like developers’ track record of executing projects and on-time deliveries will become important differentiators for consumers.

Nonetheless, there is excitement in the industry. Navin Raheja, founder Raheja Developers and chairman of the National Real Estate Development Council, said that it will really help the sector to get foreign funds and propel growth. “However, it will take 1-2 months for the sector to start receiving the funds,” he said.

“The developer community has for long demanded relaxation on the funding front and this will encourage more investors to consider investing in India, if they are able to exit from the projects sooner,” Anil Sawhney, director at School of Construction, RICS School of Built Environment, added.

With Prime Minister Narendra Modi promising a house for every family in India by 2022, the potential of the sector is immense. According to an estimate by the National Housing Bank, the housing shortage in India stands at around 19 million.

Between April 2000 and August 2014, the construction sector received FDI worth $23.75 billion or 10 per cent of the total FDI in India during the period. The total loan outstanding to the housing sector (to home loan borrowers) in the public sector banks till September 2014 stood at Rs 5,804 crore compared to Rs 5,056 crore during the same period last year, according to data from the Reserve Bank of India.

“However, the issues the sector is grappling with is not related to supply. It is related to the demand side. There is no demand because the mortgage rates are very high, projects are not completed on time and there are no adequate penalties for non-completion of projects on time.

Also, there are multiple regulatory agencies for getting approvals, which leads to further delay,” Bairathi said.

These are teething troubles that need to be addressed for the sector to reap the benefit of the liberalised FDI regime. Bairathi added that the projects are developed in phases by the developers while the trunk infrastructure is developed only during the completion of the projects, when buyers actually start residing.

“So if a foreign investor wants to invest only in, say, first phase, then it means that she/he will be stuck till the completion of the entire project, which may take a few years. The government should clarify if the investor can quit after developing the phase in which he invested,” he said.
Neeraj Bansal, partner and head of real estate and construction, KPMG India, said that on the point of lock-in, the new conditions are “severely restrictive”.

“Firstly, in a case where a foreign investor has invested in multiple tranches, the three-year lock-in would be calculated from the date of last tranche as against the tranche wise lock-in earlier… What happens to existing investors who invested on the basis of the earlier policy which had tranche wise lock-in. Do the new provisions on lock-in apply to existing investors as well? The government should clarify that,” Bansal said.

He added that now the players would be able to get FDI in projects with smaller ticket sizes as well while developers holding on to completed malls or shopping centres will now have an additional exit avenue to sell to foreign investors and release capital for further construction development activities.

A leading developer who refused to be quoted said that while the relaxation in investment policy is welcome, “it is the ease of doing business and relaxation of norms so that the pro-rata cost of land comes down”.