The proposed Goods and Services Tax (GST) is the biggest tax overhaul since independence from Britain in 1947. 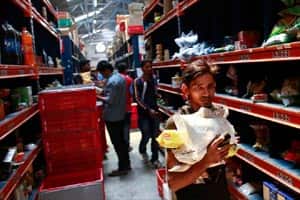 GST is a long-awaited and important piece of legislation that aims to simplify and standardise India's tax structure. (Reuters)

A passionate plea for forging consensus on running of the House as well as on wider national policies was made by retiring members of Rajya Sabha today, as the Monsoon Session was completely washed out due to continued Opposition protests. However, keen to ensure passage of GST bill, Government is keeping open the option of reconvening the session if they manages to rope in some regional parties.

The Upper House was adjourned since die at noon after it bade farewell to P Kannan (Cong) and nominated members Ashok Ganguly and H K Dua who complete their six years terms in October and November – the intervening period between Monsoon and the Winter Sessions.

Rajya Sabha was adjourned for half an hour till noon after Ganguly and Dua made farewell speeches and the listed papers were laid on the table, as the House completed its limited agenda.

When it reassembled at noon, the House was adjourned sine die by Chairman Hamid Ansari.

Earlier as the House met for the day, Ansari mentioned that Kannan, who represented Puducherry, will retire on October 6 while nominated members Ganguly and Dua will complete their six year term on November 17.

The trio, he said, had contributed significantly to the deliberations of the House with their active participation. “They have definitely enhanced dignity and prestige of this House,” he said adding that Rajya Sabha will cherish their association.

In his farewell speech, Dua said he had seen ups and downs in his six year tenure with his participation in debates on price rise, nuclear liability bill and Maoist violence being the high points, but an instance of tearing of bills was a sad moment.

He said disturbances and disruptions, first during the UPA rule and now under NDA government, “bring bad name to Parliament.”

“Tolerance level is low. Dissent is not acceptable to anyone”, Dua said, adding that the need of the hour was evolving consensus on wider national policies like terrorism and nuclear programme.

“There is a need for consensus on running of Parliament,” he said adding the government and Opposition need to sit together to draw out “how to run House better.”

In his speech, Ganguly thanked members for warm friendship and embracing him as one of them and said “unfailing bonhomie in the Central Hall (of Parliament) cutting across party lines is most reassuring feature of our unity among diversity.” he said.