State-owned discoms in Rajasthan are delaying late payment surcharge (LPS) to wind power generators even after the state regulator directed them to clear all the dues within three months. 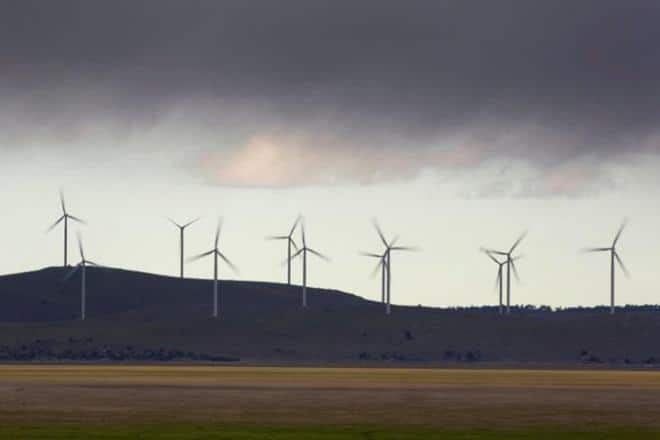 In a meeting between the wind industry and discom officials on August 11, it was decided that the dues on the principal amount would be cleared within seven working days. (Reuters)

State-owned discoms in Rajasthan are delaying late payment surcharge (LPS) to wind power generators even after the state regulator directed them to clear all the dues within three months. The regulator had sent the directions in an order earlier this month. The discoms have started disbursing payments against the principal amount due to power producers, which sources say have been pending for more than 12 months. However, the discoms are looking for a 50% discount on the pending late payment surcharge.

In a meeting between the wind industry and discom officials on August 11, it was decided that the dues on the principal amount would be cleared within seven working days. Payments of about Rs 100 crore have already been cleared and another Rs 50 crore will be paid in the ongoing week by Jaipur discom.

While senior officials from Rajasthan discoms said that the companies can comfortably pay back their bank interests even after the 50% LPS discount since the LPS rate is as high as 24%, an investor in the Rajasthan renewable energy sector who did not wish to be named said that this might lead to a negative IRR situation.

M R Vishnoi, managing director, Ajmer discom, said that since the discom is in a relatively comfortable financial position, making payments would not be a problem. “We want the consent (for 50% LPS discount),” Vishnoi added. A senior official from the Jodhpur discom said that since the issue relates to all three discoms in Rajasthan, the decision of the August 11 meeting is likely to be followed. Jodhpur discom owes about Rs 350 crore to wind energy players.

“Clearing all the principal dues is a gesture from our side, and we hope that the wind producers will be sympathetic towards the financial stress of the discoms and pay heed to our request in the next meeting. About 60% of the wind generators have already agreed to the request,” R G Gupta, managing director of Jaipur Vidyut Vitaran Nigam Ltd told FE.

FE reported recently that dues pending from Rajasthan to larger independent power producers such as ReNew Power are now of hardly two months and Mytrah Energy has recovered the entire dues from the state.

Gupta added that the discom has requested the 50% LPS discount from wind generators, and the pending payment of the principal amount is not contingent on wind power producers agreeing to the proposal. The next meeting on the LPS issue would be held after all the principal dues are cleared.

Wind energy producers selling power to Rajasthan discoms had claimed that the latter are forcing them to sign consent for accepting only 50% of the LPS on long pending dues. When such consents are not signed, generators informed the Rajasthan Electricity Regulatory Commission (RERC) that discoms are not releasing the payments of even the principal amount.

A segment of the industry had apprised RERC about the situation, stating that Rajasthan discoms have neither paid for the electricity supplied, nor have they paid any late payment surcharge. They claimed that this was “a proven case of willful disobedience” as RERC had repeatedly asked them to clear the dues in June and September, 2016 and February this year. Companies which appealed to RERC with these charges include Orange Renewable Power, Hero Corporate Service, Avon Cycles and Dhariwal Industries—which is linked to pan-masala maker Manikchand group.

RERC, in an order dated August 3, directed the discoms to clear the dues, including LPS, to renewable electricity generators within three months. Lawyers representing the discoms had stated that RERC’s orders were not complied with due to financial crunch of the discoms.

The state’s discoms posted a total loss of `12,474 crore in FY15. Their outstanding debt stood at `81,149 crore at that time. Rajasthan has issued bonds worth `72,090 crore under the Uday scheme. The state generated 790 million units of electricity through wind power in June from an installed capacity of 4,281 MW. The average wind power tariff in the state is around `5.9/unit. The lowest wind tariff discovered in the maiden and, as of now, the only wind reverse auction held in February was `3.46/unit. Many discoms from other states have reportedly been reluctant to buy wind power at earlier rates after wind power rates touched the new low. Andhra Pradesh’s discoms approached the state regulator in June asking it to change the terms of PPAs, signed in 2015, where per unit wind tariffs were set between `4.76 and `4.84. One of the Karnataka discoms cancelled PPAs of 75.6 MW with wind power projects in July. On the sidelines of an event here, power minister Piyush Goyal reiterated that PPAs terms and conditions are sacrosanct and they cannot be reneged unilaterally.