The minister said he has recently held a meeting with Maharashtra chief minister Devendra Fadnavis in this regard. 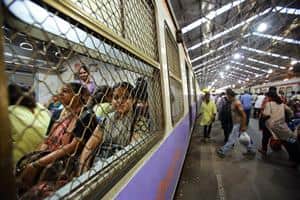 An empty coach of a train derailed between Elphinstone and Lower Parel Railway station in the early morning hours of Tuesday causing diversion of trains. No injuries were reported.

Railway Minister Suresh Prabhu today said his ministry has chalked out a plan to invest Rs 40,000 crore in different projects in Mumbai, blueprint of which will be prepared before August 15.

“I belong to this city. And not only me but all my colleagues know what needs to be done so ample attention would also be given to Mumbai,” Prabhu said at the foundation stone laying ceremony of an FOB (foot over bridge) at suburban Khar railway station here.

The minister said he has recently held a meeting with Maharashtra chief minister Devendra Fadnavis in this regard.

“I held a meeting with the chief minister, chairman of Railway Board and other senior railway officials and we have chalked out a plan to invest over Rs 40,000 crore. Its blueprint will be prepared before August 15,” he said.

Prabhu said Central and the state government will collaborate to implement some of the big projects in the megapolis like elevated corridors between Chhatrapati Shivaji Terminus and Panvel; Churchgate-Virar elevated corridor project to be completed in two phases.

“I have personally spoken to senior officials to execute the work within stipulated time frame and if there is any technical glitch, I will personally see to it,” he said.

Outlining his priority to turn Indian railway into a world-class transport medium, Prabhu claimed, “The way we have invested money through some extra budgetary resources, no other government in the past in its first two years tenure has done.”

The minister later inaugurated a new FOB at suburban Vile Parle station built with a cost of Rs 2.30 crore.