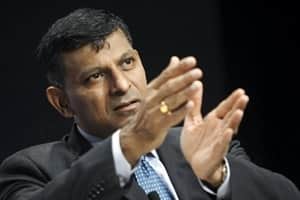 Besides, the central bank may wait for the impact of delayed monsoon rains before making the next move. (Reuters Photo)

1) Mohamed El-Erian: Allianz SE’s chief economic adviser, says financial markets would ‘understandably’ not respond well if Raghuram Rajan is not given a second term as Reserve Bank of India. “He is rightly deemed as one of the very best central bank governors in the world,” El-Erian said in an interview to a business daily. “Indeed, few can match his expertise, experience and knowledge.”

2) Digvjaya Singh: Congress leader recently batted for a second term for RBI Governor Raghuram Rajan, terming him as a competent man who has performed exceedingly well in his current assignment. “He (Raghuram Rajan) is a very competent man, and he has performed exceedingly well as Reserve Bank Governor, and I think he deserves a second term,” AICC General Secretary said.

3) Christopher Wood: CLSA’s equity strategist said that the biggest risk to the Indian bond and currency markets will be if Rajan is not given a second term. Wood has pointed out Rajan’s strict monitoring and actions in controlling non-performing loans.

4) Avinash Dixit: Backing a second term for RBI Governor Raghuram Rajan , leading Indian-American economist at Princeton University said the apex bank chief should have “full operational independence” when it comes to pursuing targets on employment, growth and inflation. “I think Raghuram Rajan deserves a second term as the RBI Governor, he should have full operational independence in pursuing targets (inflation, employment or growth).

5) Naushad Forbes: President of the Confederation of Indian Industry (CII), said “I think the Governor has been doing a great job for the country and we would certainly see it as a very positive move if he were reappointed.

6) Adi Godrej: Coming out in support of RBI Governor Raghuram Rajan, leading industrialist Adi Godrej has said he is an admirer and it will be a “good thing for India” if his tenure is extended. “I think he has done a good job. He is very well respected across the world. He is a very capable person, very well respected person and I think if his term is extended then its a good thing for India,” Godrej said.

“He was voted as best Central Bank Governor in the world by one of the magazines. I am an admirer of him and I support his extension.”