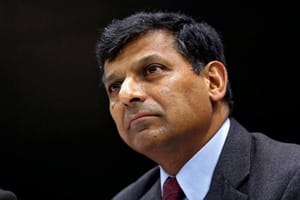 A government official told NewsRise that Subir Gokarn and Urjit Patel are the top contenders for the RBI Governor post. (Source: Reuters)

The NDA government led by Narendra Modi is likely to name the new Reserve Bank of India Governor this week, television channel CNBC TV18 reported citing NewsRise. A government official told NewsRise that Subir Gokarn and Urjit Patel are the top contenders for the RBI Governor post. There has been speculation over who the next governor of the RBI will be after former deputy governor Subir Gokarn met outgoing RBI chief Raghuram Rajan earlier this month. Gokarn also met finance secretary Shaktikanta Das. Gokarn was director of research for Brookings India till November 2015, after which he become the executive director of India’s mission at the International Monetary Fund (IMF). He has done his Ph.D in Economics from the Case Western Reserve University. Prior to becoming the deputy governor of RBI, Gokarn was the Chief Economist at Standard and Poor’s Asia-Pacific.

Other names that are doing the rounds are Chief Economic Advisor Arvind Subramanian, former World Bank chief economist Kaushik Basu, NITI Ayog vice-chairman Arvind Panagariya, former RBI deputy governor Rakesh Mohan and SBI chairman Arundhati Bhattacharya. The government it seems is keen to appoint someone who has a good understanding of the Indian system. Raghuram Rajan will be leaving RBI in less than three weeks from now as his term ends on September 4. Many feel that the government’s inability to check Swamy’s continuous attacks on Rajan may have led to his decision to not continue beyond the first term. However, PM Narendra Modi has been all praises for the governor, even calling him a “good teacher”. Rajan in a letter to the RBI staff said that he would return to the academic world, to the University of Chicago where he served as a professor of economics at the Booth School of Business. Raghuram Rajan and Bimal Jalan are the two governors who did not serve a five-year term since.

Next Story
After Assam and Bihar, Jharkhand ratifies GST Bill